Bozcaada is a tiny island located off the Northwest coast of Turkey. It has it’s own castle, is heavily influenced by the Greeks, and is known for it’s wine production. With the perfect climate for growing Kuntra, the island’s local grape, Bozcaada has attracted six wine producers to pitch up on the island. But does it have much to offer? Is it worth a visit? Is an island full of wine really a wine lover’s paradise? This post covers everything you need to know about Bozcaada, Turkey.

When I headed to Turkey to visit my brother, Mike, and his wife, Sarah, they decided to drive up to Istanbul to meet me instead of flying so that we could drive back down to Izmir and stop in Bozcaada along the way. We had a nightmare leaving Istanbul, but finally arrived to the port, hopped on the ferry, and arrived in Bozcaada. We had a nice looking AirBnb booked, loved the idea of heading to a Greece-like island, and were excited to explore the harvest festival that was going on. To us, after all, harvest festival meant wine…and lots of it! Oh, we were wrong… 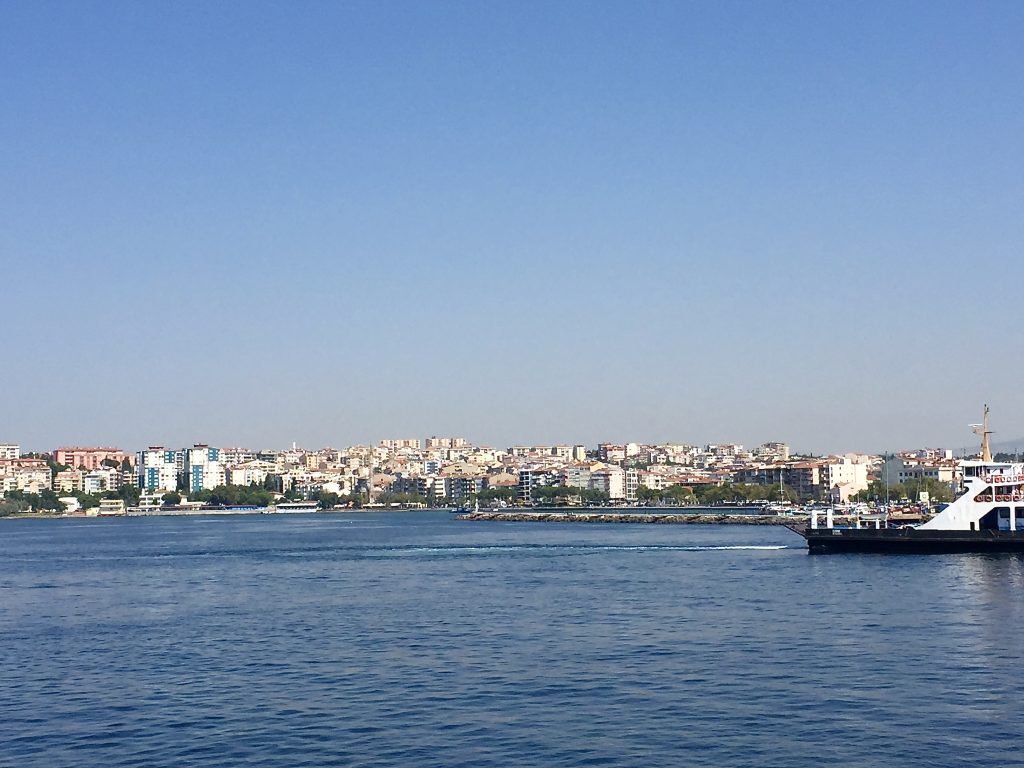 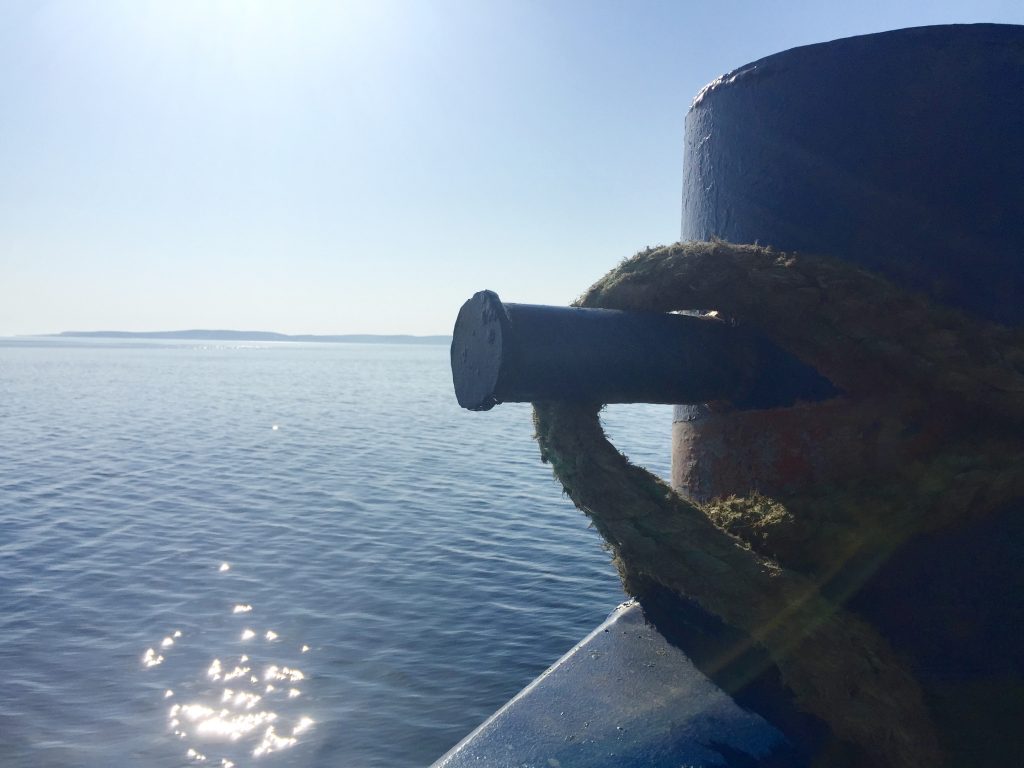 Wine tasting in Turkey is an interesting thing because they aren’t very public about it. After all, there are strict alcohol laws in Turkey, which include the inability to advertise alcohol. However, if you know about it, you can find some great wine tasting opportunities in Turkey! Urla is one major wine producing region in Turkey (also with six wineries), and Bozcaada is another, so we expected our visit to Bozcaada to be all about wine! And, because it’s an island, expected the alcohol rules to be a bit more relaxed. We expected plenty of tastings, wine available at market stands, etc.

READ ALL ABOUT WINE TASTING IN URLA

We found Bozcaada’s wine festival down by the harbor, but didn’t manage to find any wine there! Instead, we found live music, market stalls with souvenirs and fresh produce, and ferries packed with tourists arriving every couple of hours. To be fair, we missed the major harvest days when visitors could help pick the grapes at the vineyards. But still, this was supposed to be an island known for it’s wine. We expected so much more!

After revisiting our expectations and going in with fresh minds, though, we started to discover the charm of Bozcaada. Here are the best things to do in Bozcaada, Turkey:

The central town area was extremely busy around dinner time, so we thought to look for something a couple of streets back. I’m pretty sure this was thanks to Mike’s TripAdvisor skills, but I’m not 100%. Regardless, we headed into some adorable cobblestone streets that were lined with restaurants on both sides. They reminded me of Santorini’s Ammoudi Bay – no harbor views, but outdoor seating, extremely fresh fish, and so much character!

How was the meal, you might ask? Well the food was delicious. The wine was great, too, but we didn’t get to enjoy too much of it. Sarah and I each spilled a full glass of red wine (I only spilled on the ground; she spilled on my white shorts!), which made us laugh cry throughout the entire meal. Mike was embarrassed and a bit angry, but the restaurant was very understanding!

Restaurants on the Harbor

If you wander around the harbor, there are more restaurants and cafes that all have their own story. They all had their fresh seafood on display, extensive wine lists, and gorgeous views of the fishing boats. We were shocked when we sat down to a nice harborside restaurant for dessert and wine to find out that we were the only tourists who had eaten there all day! There we were, watching floods and floods of tourists disembark – yet he claimed we were the only ones. Maybe by “tourists” he meant “people not from Turkey”, which I would believe, but it was still a bit flattering!

Delicious Wine by the Bottle 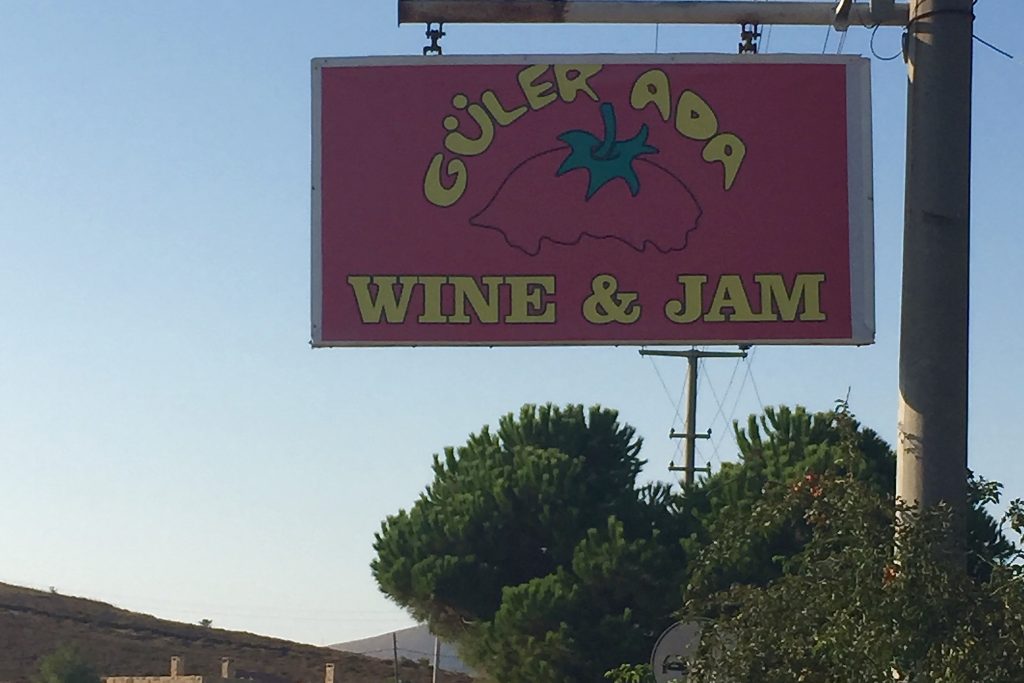 We ended up driving around the island and popping into a couple of the wineries. In town, we settled for walking into every wine shop and asking if they did tastings. We were directed to a few secret areas for tastings, rejected by a few places, and at one actually given a tasting! However, the wine we did have was incredible! We bought bottles at dinner from wineries on the island so we were always trying the wine, even if it wasn’t in a proper tasting setting. My favorite wines were from Camlibag, Corvus, and Talay. 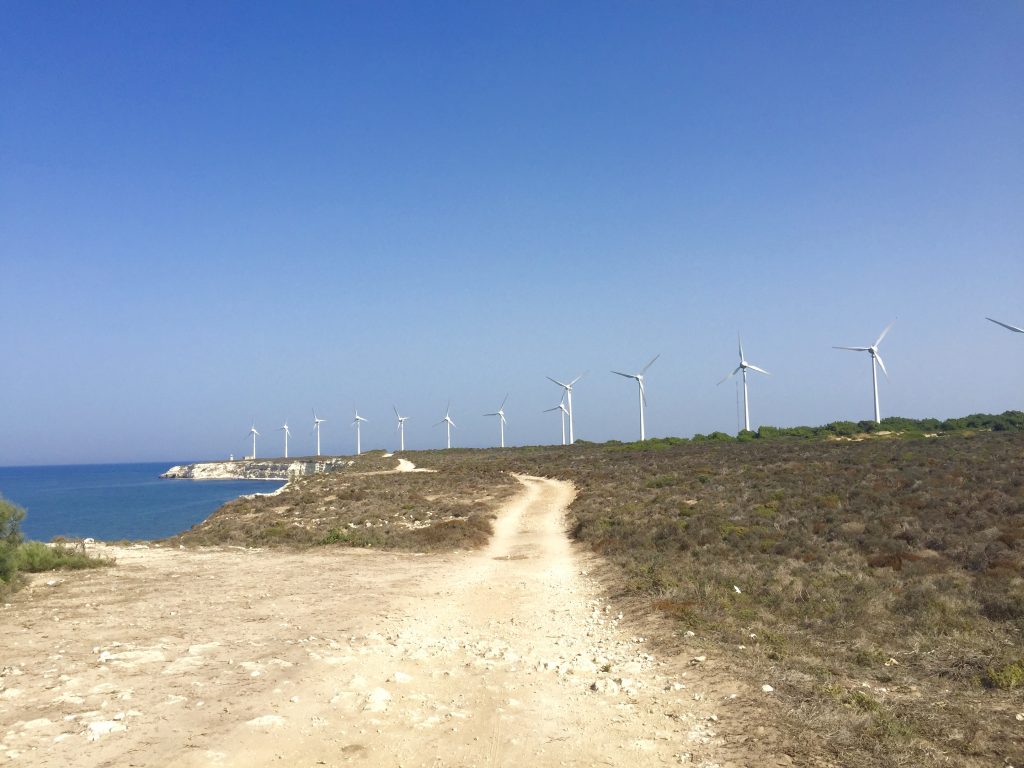 Bozcaada generates enough wind power to power the entire island, and sends the rest to mainland Turkey. Isn’t that incredible? This tiny island with a population of under 3,000 has an impact exponentially larger than the island itself! We drove out to the wind farm to check out the turbines and the lighthouse – the turbines are MASSIVE, and the light house is tiny…so tiny that we could barely see it!

While we opted to go during the day (and were the only ones there), it is a very popular spot to watch the sunset. Be prepared to walk, though – the lighthouse is much farther than it seems!

The Character of a Tiny Island 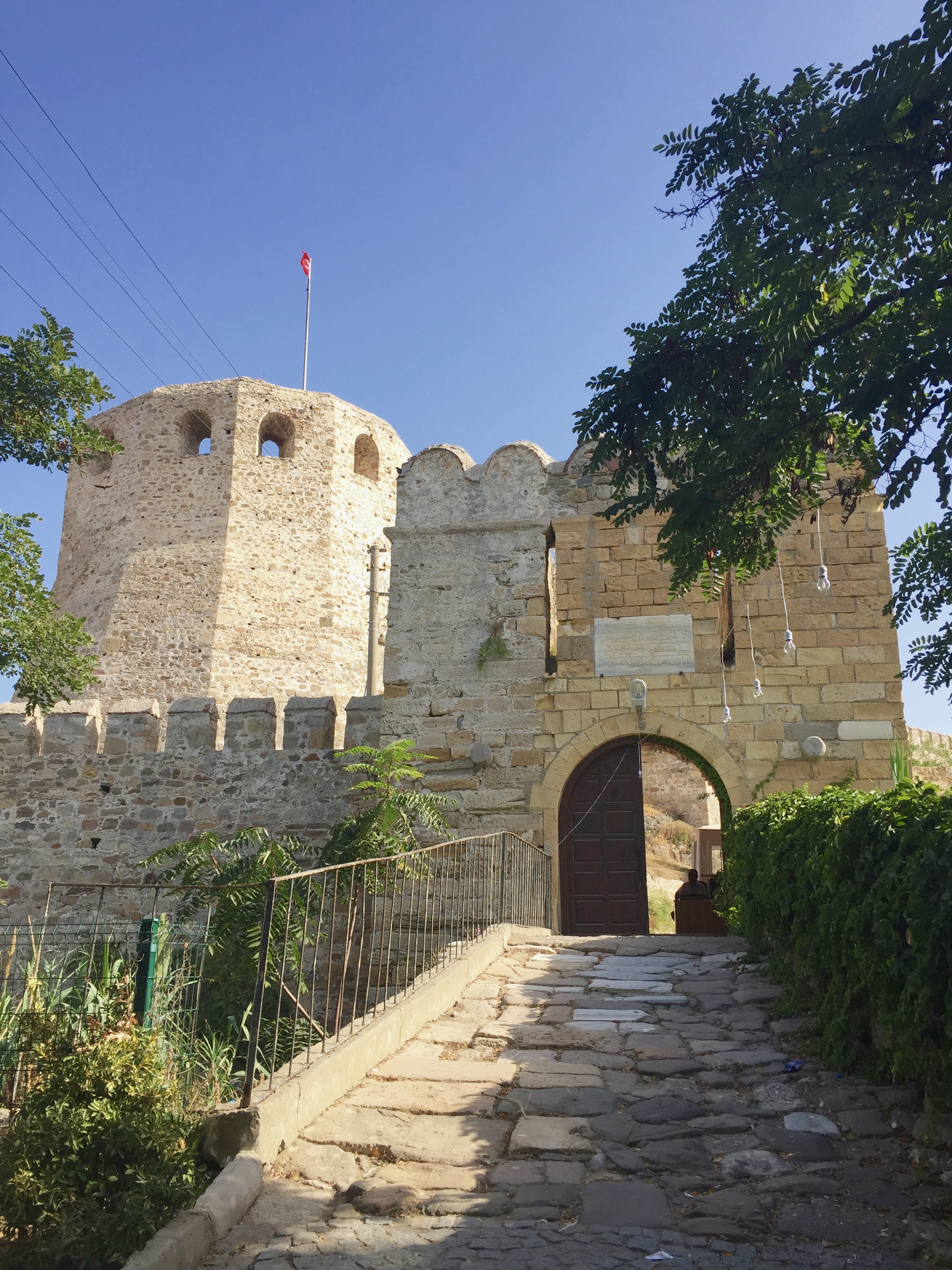 HEADING TO ISTANBUL?
Find out how to spend one day in Istanbul!

The people of Bozcaada were great – from the shopkeepers to the waiters to the people working at the wineries. Even the ones who rejected our request for a tasting did it in a way that made me feel bad for them even though I was the one being deprived of wine! On our first night, Sarah and I each spilled full glasses of wine at the restaurant and the waiter didn’t even look the least bit annoyed. The people of Bozcaada amazed me! But really – it was such a cute and charming island, and the people definitely had the island charm as well.

So…is Bozcaada, Turkey worth a visit? 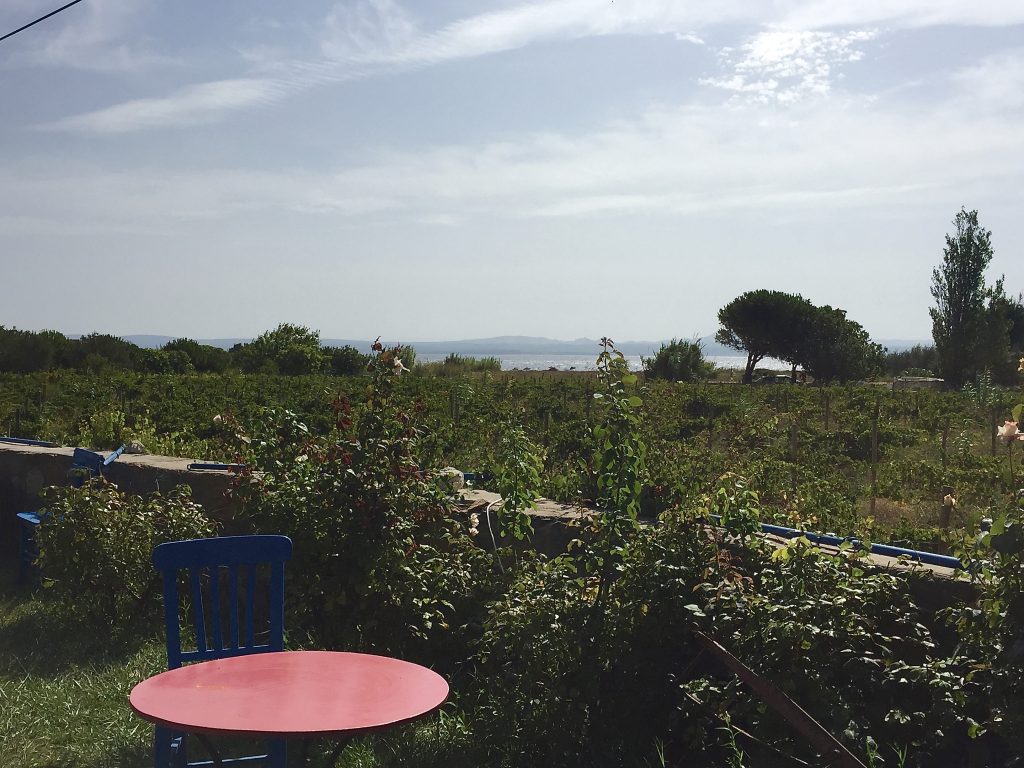 Bozcaada is a bit of a hot mess, really. However, we did start to uncover it’s charm once we accepted that fact. So I would say yes, it is worth a visit, if you are local.  If you’re driving around Turkey and it’s not too far out of the way, then maybe you should give it a chance! I wouldn’t necessarily say it’s worth a visit on it’s own. However, it was a unique experience and I imagine I could completely fall in love with the island if I were to go again!

If you decide to visit, here is a great guide for more things to do on the island. Also check out Sarah’s post on our issues leaving the island so you don’t make the same mistake we did!

It’s so unnatural to me to write about a place I didn’t absolutely LOVE! Have you ever just not felt the spark with a city or town?

Tell us your stories in the comments below! 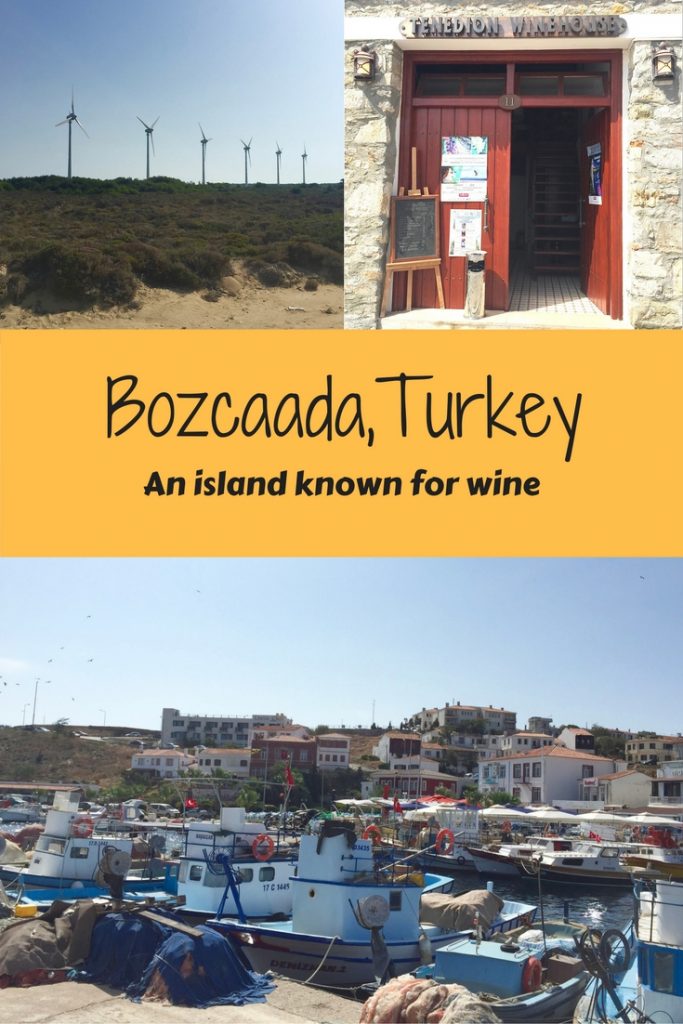