The first time I truly “traveled” was with my dad back in 2013. I went on a school trip to Prague and, a week after it ended, was meant to be starting my summer abroad in Dublin. While flying back and forth was an option, it wasn’t a fun one. Instead, my dad met me in Prague and we made our way to Dublin by train (and a ferry), stopping in Munich, Geneva, Paris, and Edinburgh on the way. We had just over a day in each city, so we learned to be efficient. The hop-on, hop-off bus tour ended up being our go to. It was a great way to see almost all of the city’s main attractions in two hours. Then, we could go back and make an educated decision on what we wanted to see more of in the short time we had.

After visiting Bratislava (and our quick trip to Trnava for the football match), Sean and I had about 8 hours to kill in Vienna before our flight back to London, and it was pouring rain on and off. We decided to give the Vienna hop-on, hop-off bus a try in order to see as much of Vienna as possible while staying dry and making our flight on time.It was Sean’s first time on a hop-on, hop-off bus, and he understood that it was a great concept, so he was eager to see what it was all about. I was just excited at the idea of being dry while exploring Vienna.

Vienna’s hop-on, hop-off bus (through Vienna Sightseeing) offers six different routes. The price to do one route in 24 hours is €17, and it costs €25 to have access to all routes. We paid the €25 and had time to go all the way around on two routes – yellow and green. 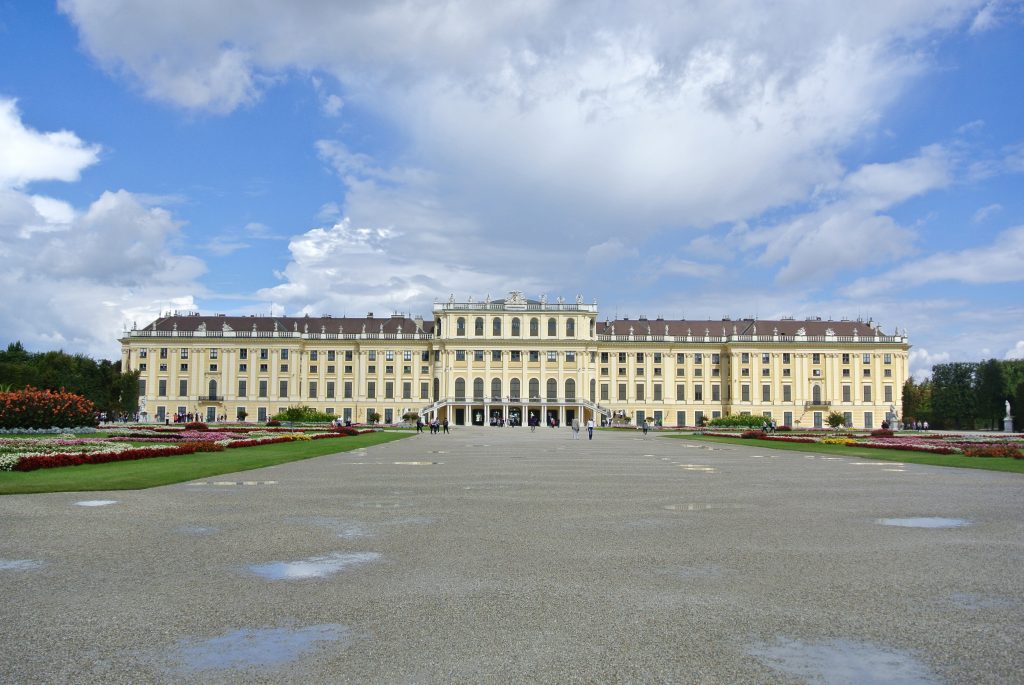 Schönbrunn Palace is such a beautiful sight.

We chose to do the yellow route first because it was the only one that had a stop at the main train station, where we were dropped off, and it was also the only one that went out to the glorious Schönbrunn Palace. I was surprised by this because the palace is one of the must see items in Vienna, and I remembered it being very popular from my last visit.

We downed our coffees, bought our tickets, and grabbed a seat in the front of the upper deck. 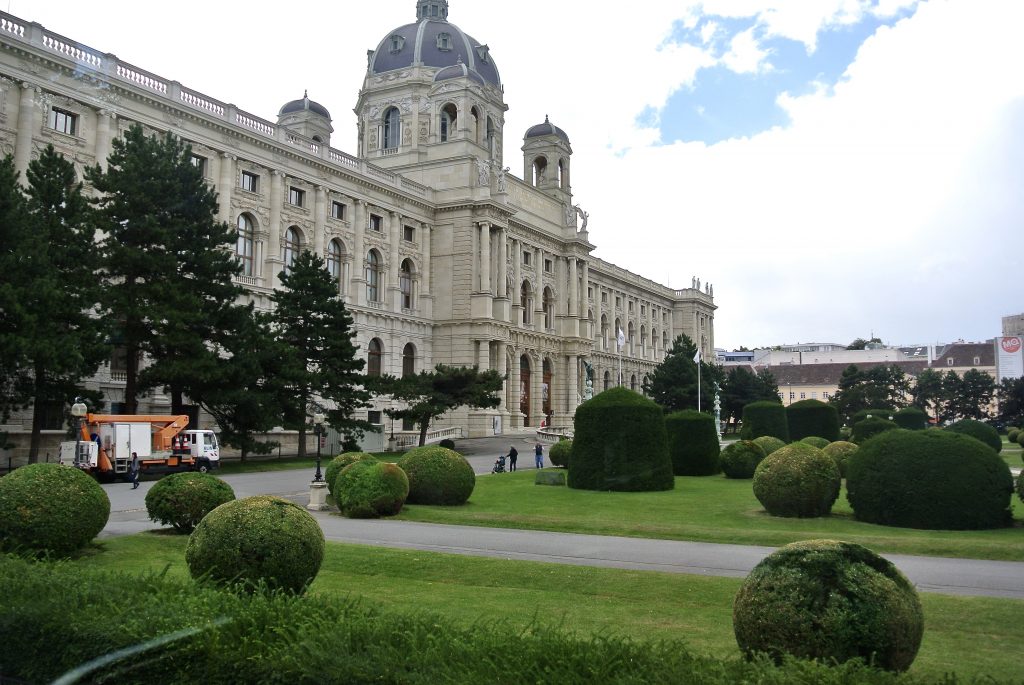 I visited Vienna’s Museum Quarter during my last visit to Vienna – it is a great place to walk around for a bit. 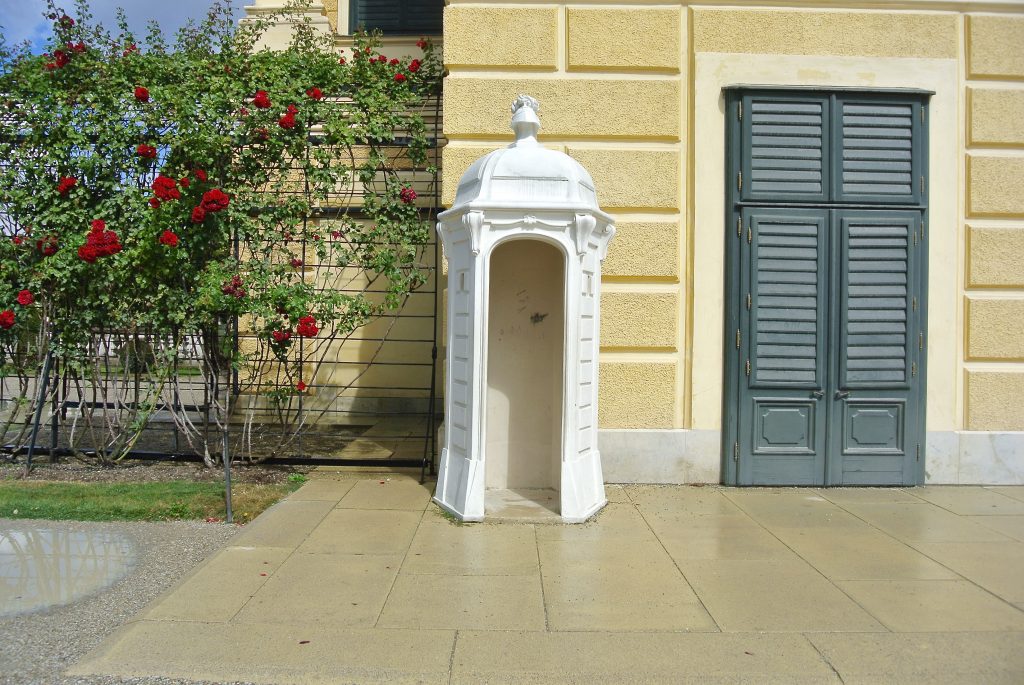 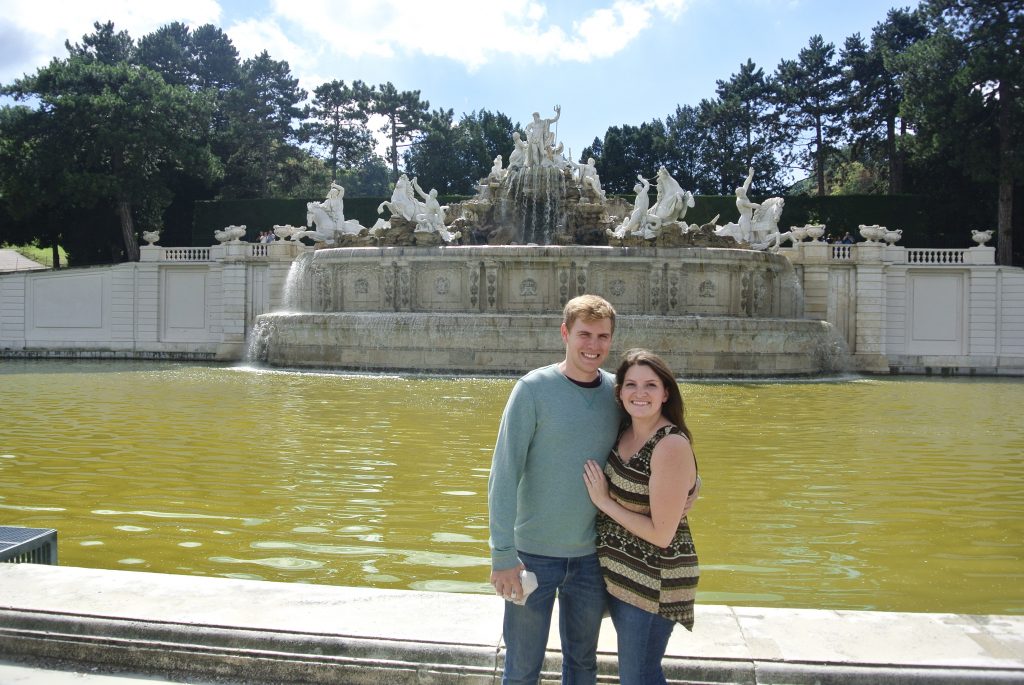 The commentary for this tour was not the best – we would get a quick snippet of each site followed by some elevator music. The commentary did not go very in depth and there was no additional information about the city, the streets we were going down, etc. I always prefer live commentary, but usually the recorded commentary is still interesting and captivating. That’s what makes the hop-on, hop-off bus tours so great! So, it’s safe to say it was a bit disappointing to be unimpressed.

Although we were not too impressed with the commentary, the main purpose of the yellow tour was to get us to Schönbrunn Palace, so we were very happy when we arrived and the rain tapered off. We walked around the Palace and, as we saw another rain cloud approaching, decided to head back to the bus. We checked the bus times and thought we only needed to wait about six minutes.

In those six minutes, the downpour started again. Then the bus was late…by thirty minutes. And when it finally arrived, the seats on the bottom deck were all full and the seats on the top deck were soaking wet, which was confusing given that fact that this was not an open air bus. We had no way of cleaning up the seats, so sat on the very edge trying to avoid water the entire ride back to the train station. 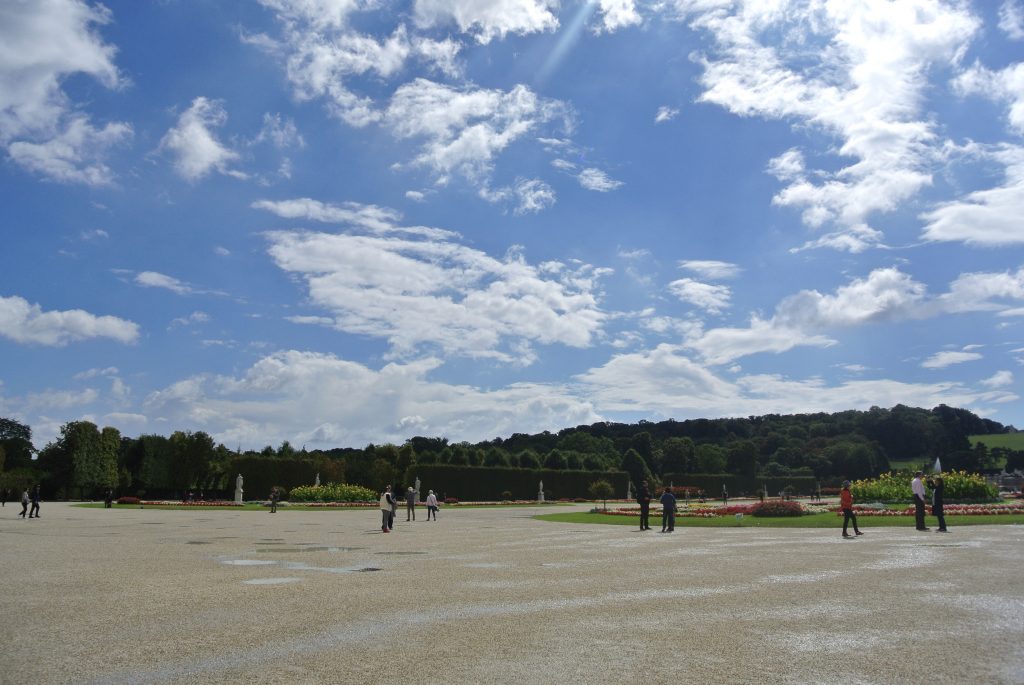 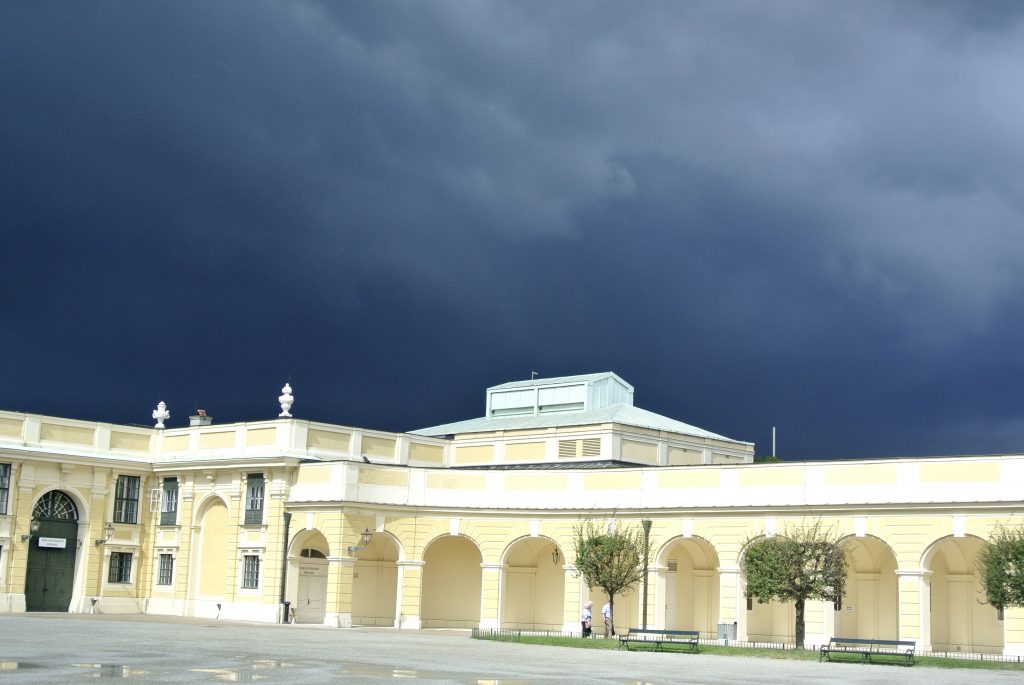 I took these two images within about a minute of each other. Storms are crazy! 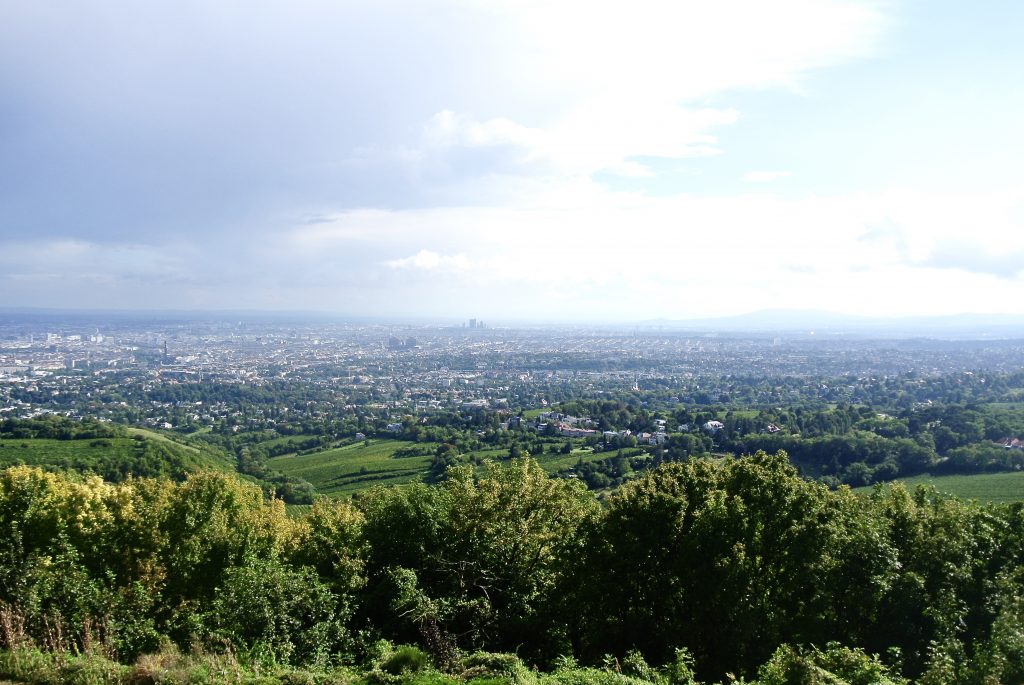 We loved this gorgeous panoramic view from the top of Kahlenberg Hill.

After a frustrating closing experience on the Yellow Route, we debated skipping out on the rest of the day altogether. I jumped on TripAdvisor and read a ton of reviews about others having the same experience with late buses, or buses not coming at all. We started brainstorming other things we might be able to do with the rest of our day, but decided to give the green route a try. After all, the weather was still questionable and we couldn’t think of a better option.

The green route was extremely appealing because it contained two things we love to find in each city we visit – panoramic views and local wine. We got off the Yellow Bus at the train station after finishing the full loop and opted to get a taxi to the National Theatre, where the Green Line starts. The bus arrived on the hour exactly as expected, and right as another downpour started!

The Green Route does not spend much time in Vienna. It makes a few stops on the way out, until it arrives in Grinzing, a local village turned suburb, known for its wine production. We stayed on the bus while it made two quick stops in Grinzing before going up Kahlenberg hill to an incredible panoramic view over Vienna, where the bus stopped for enough time for everyone to get off, take photos, and get back on. On its way back down, the bus stopped in another town where there is a monastery that is famous for wine. It made one last stop in Grinzing (approximately an hour after the original stop there), where Sean and I got off to go for a meal and to try some wine. The bus then went back into Vienna and returned to the National Theatre. 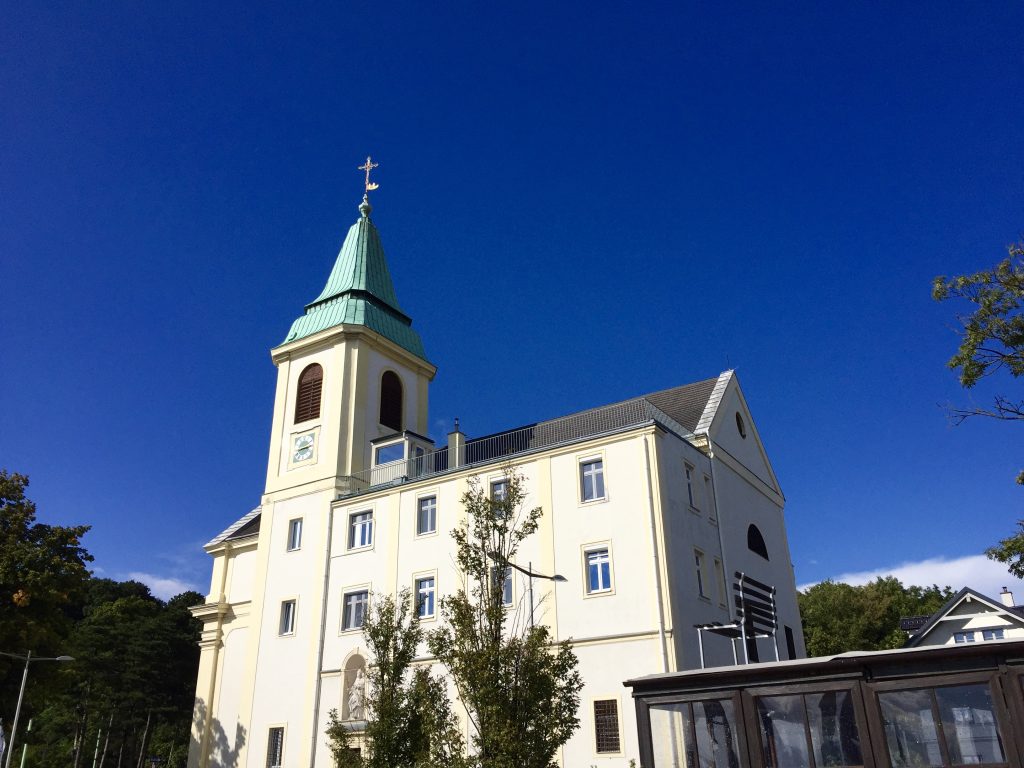 The audio recording told a really cool story about this Polish church that sits atop Kahlenberg Hill. 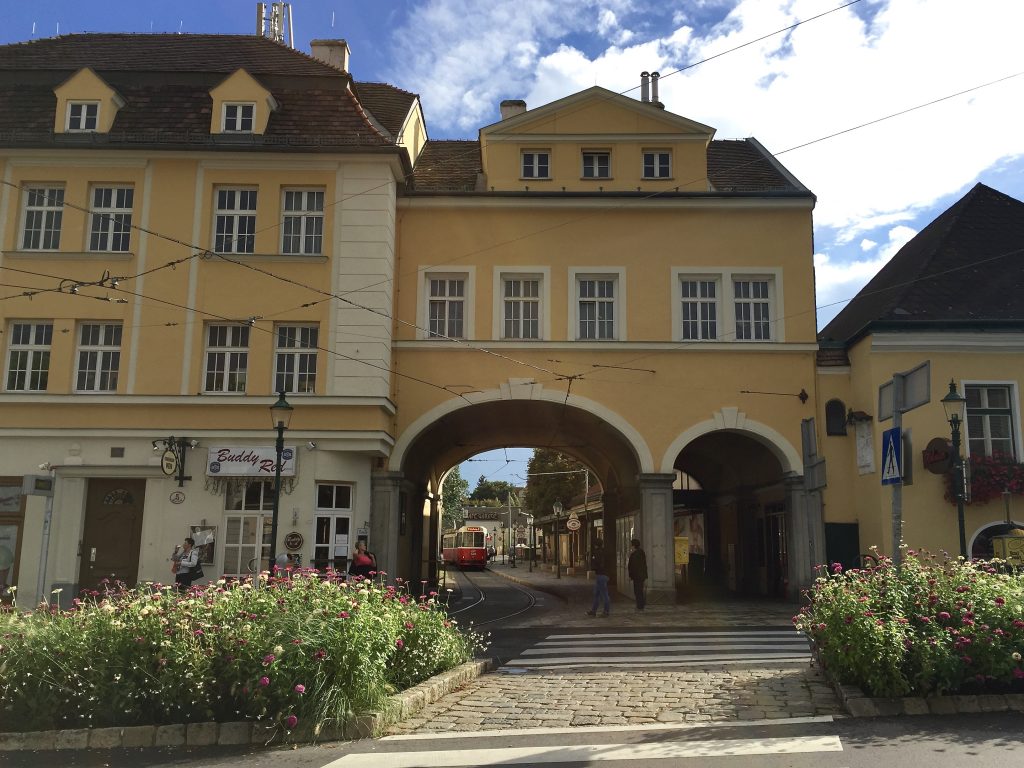 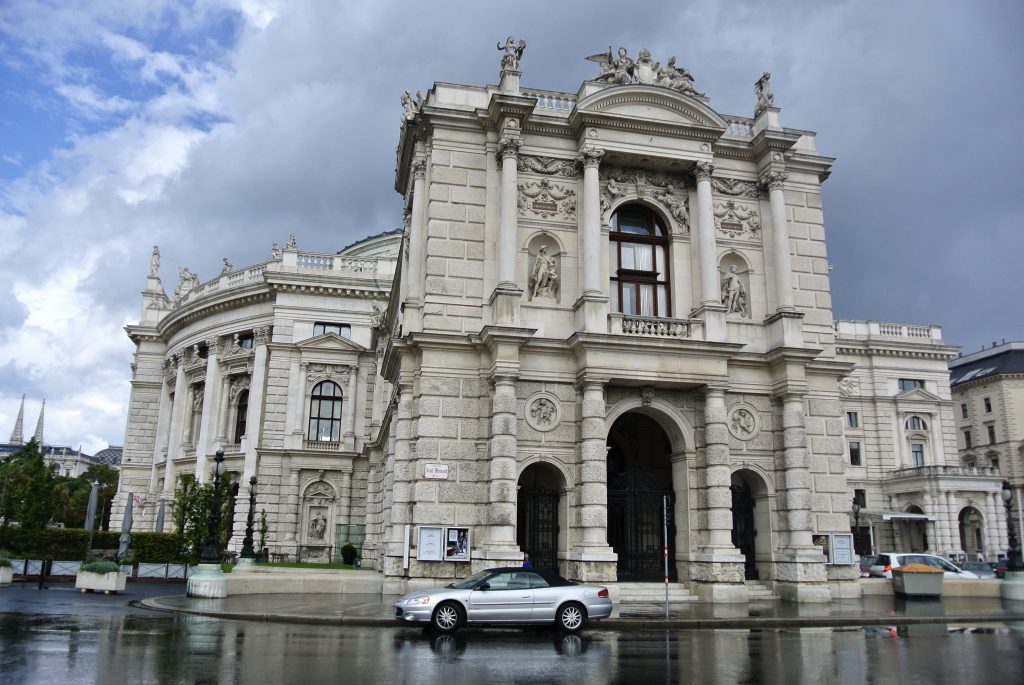 The Green Route commentary was so much better than the Yellow Route. It was the type of commentary I am used to on tours like this – very informative, with a ton of extra information, and quite engaging. Even Sean agreed that there was a huge difference in the levels of commentary.

The bus we got on from the National Theatre was a proper tour bus – one story with very comfortable seats. On the way back, we had one similar to the Yellow Route bus, but it arrived on time and got us back to Vienna very quickly.

I loved the Green Route because it took us outside of the centre of Vienna and showed us something a bit different. Grinzing is an adorable little town with plenty of local wine taverns. We read beforehand that it has become a very touristy town, but still maintains its village charm and I couldn’t agree more. Like the little towns we stopped at on our bus tours in Munich and Tuscany, the town still offered a good look into life there, while being able to cater to tourists (English speaking staff, quaint tourist shops, etc.).

We learned all sorts of cool stories about the towns that we were going through and the various places we visited. The hop-on, hop-off bus out to Grinzing and the surrounding areas reminded me of other tours we have done in the past, but was much cheaper since it’s self-guided once you get off – a great alternative for those looking to go “beyond” Vienna. 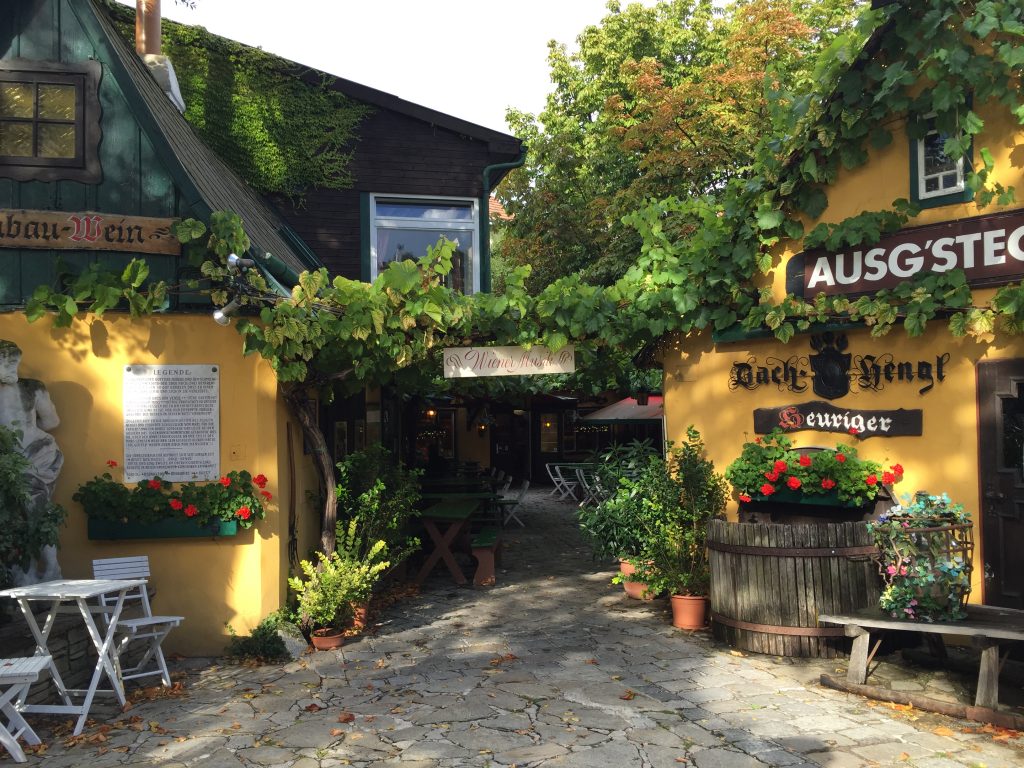 Conclusion: Is the Vienna Hop-On, Hop-Off Bus Tour a Must Do or a Must Avoid?

Vienna’s hop-on, hop-off bus tour definitely isn’t the best one out there, but it was still a great option for a rainy day – especially since we only had a few hours. The most disappointing part is that there wasn’t a route that truly covered all of the best spots in Vienna, which is normally the case in other cities. I think they could definitely reroute the buses a bit to hit more destinations in one route.

The all routes pass is definitely the way to do if you are getting a pass for 2 days or more. Between all of the routes, you can go all around and outside of Vienna. The routes do not intersect much, though, so definitely plan where you are going to hop from one to the other in advance.

Vienna itself is not one of my favorite cities, but is definitely worth a visit. You can easily tack great locations like Bratislava, Salzburg, and Budapest on to either end of your visit. If you choose Budapest, check out this list of 15 awesome things to do in Budapest.

What is your favorite bus tour? What city was it in?

Let us know in the comments below! 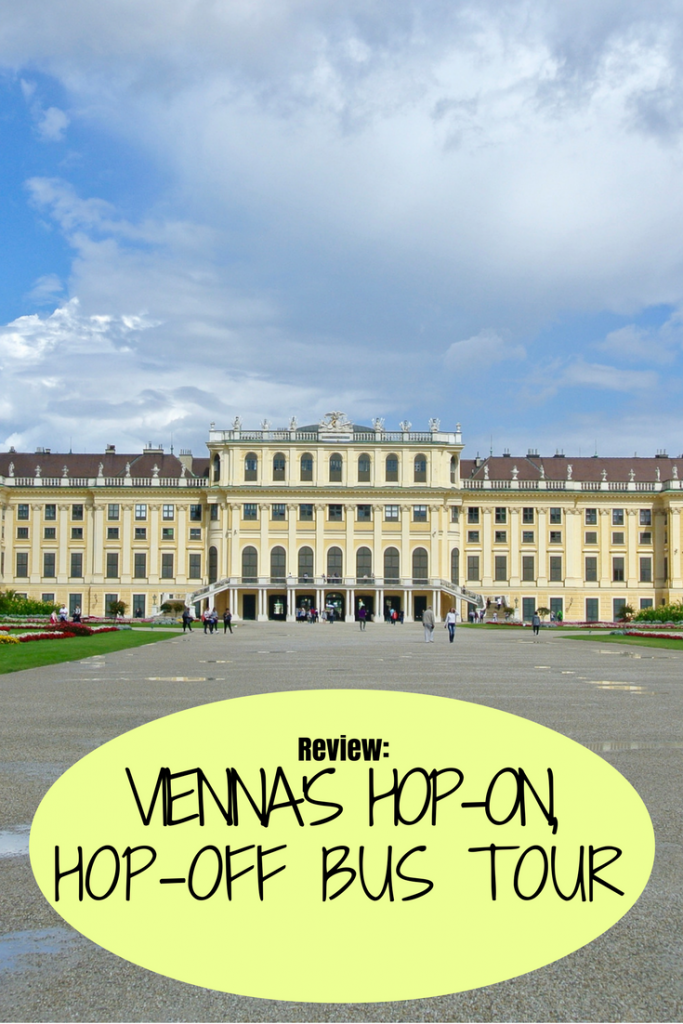