Last month was our six month wedding anniversary, meaning it’s also been six months since Giorgio moved from the US to the UK. His life as an expat pup is drastically different from his life in the US and it feels like it he is a puppy again. While he still sleeps most of the day, he runs around, explores, and snuggles like he’s a puppy still, despite his age of almost 8 years old. Travelling with a dog has completely changed the way we see and do things, but it has also enhanced our lives in the best way possible. We can’t imagine our lives without Giorgio! So we decided to write this post to celebrate the six month anniversary of his move to London – and to give you a glimpse of what life is like living and travelling with a dog. 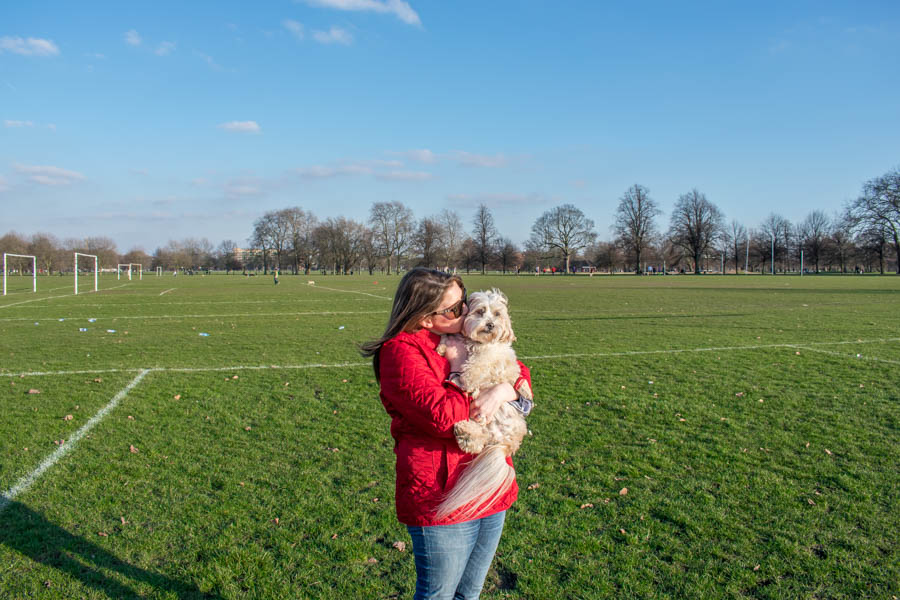 So… what exactly has Giorgio been up to in the last six months? A lot of sleeping, yes, but so much more! Moving a pet from the US to the UK can be tough on both owners and the pet, and it definitely took Giorgio awhile to get settled and adapt to his new life. Instead of a big backyard to run around in freely, he only went outside on his lead until we felt comfortable enough to let him off in the park. Instead of being surrounded by two other dogs all the time, it was just him – and the occasional puppy playdate! He had a lot to get used to, but eventually learned to love the pub visits and non-stop cuddles.

Here’s an overlook of some of the things Giorgio got up to during his first six months in the UK: 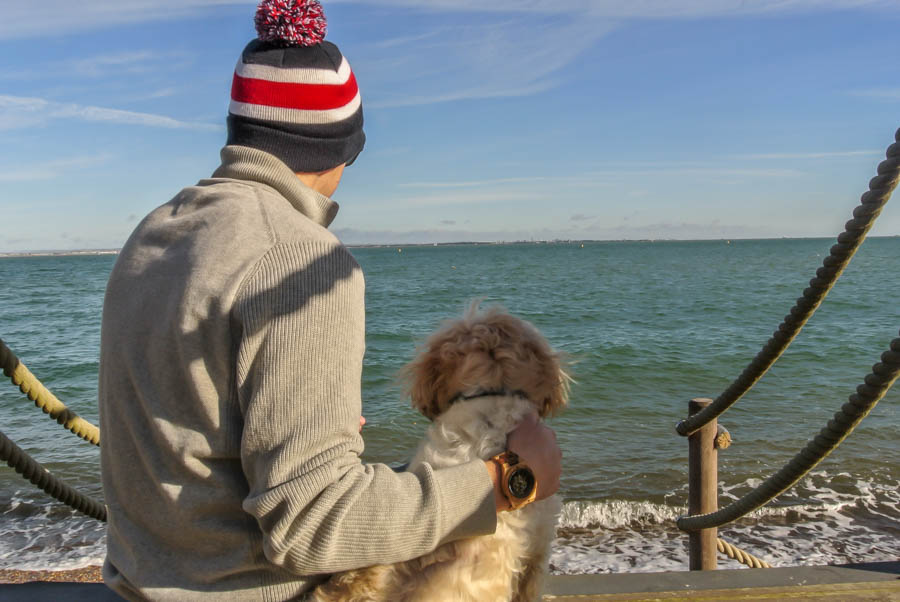 We’re going to highlight some of our favourite moments from travelling with Giorgio in this post, but to read more about each trip specifically, check out our dog friendly travel guides & tips.

Travelling with a dog: Our favourite moments

Seeing that this is (for the most part) a travel blog, we want to start by sharing how we, as dog owners, have benefitted from travelling with a dog. It’s been a different experience for us in so many ways, but also a better one. Here are some of our favourite things about dog-friendly travel:

Most dog-friendly attractions are outside. While many of the castles and ruins and lovely parks in the UK are fully dog-friendly, it’s not common to find museums and indoor attractions that are happy with non-assistance dogs running around. As a result, we spend most of our time outside during our dog-friendly adventures. And we value those little moments that happen when an owner is outside with their dog – Giorgio’s joy when he steps on the beach for the first time; his panic when a wave comes and he gets soaking wet; the excitement that comes every time we are about to put his lead on and go for a walk, and then escalates when we take his lead off and he can run free. The idea of hiking holidays and long walks are so much more appealing now that we have little Giorgio to bring along with us. 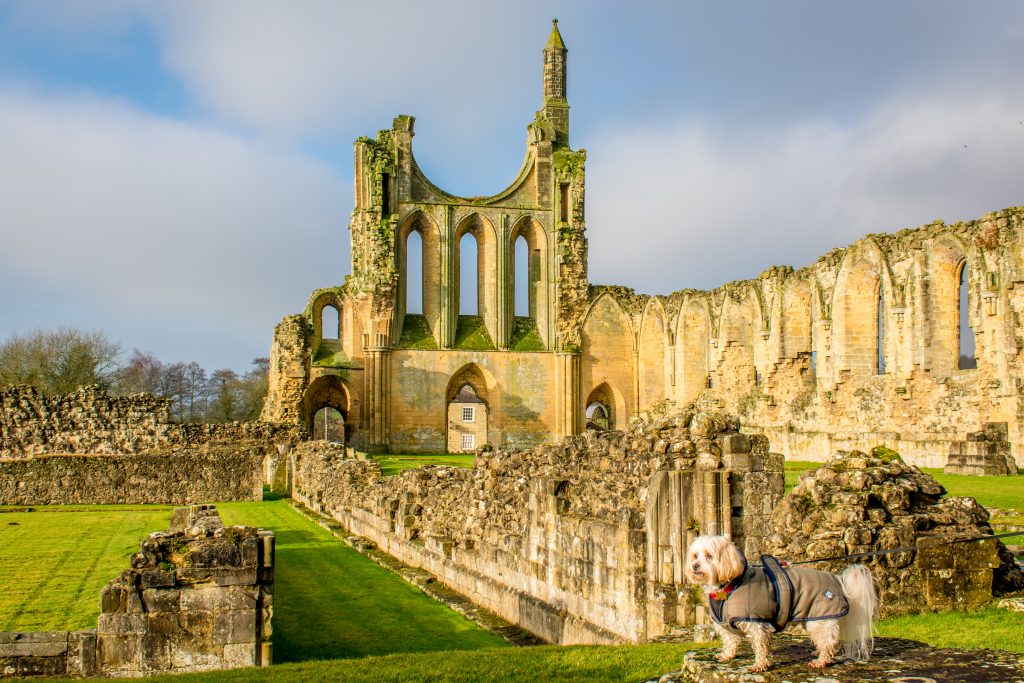 Of course, this does have a downside; like during our weekend in Yorkshire, it’s hard to see museums and attractions when visiting a more city-like place – we either have to leave Giorgio in the hotel alone (which we don’t like to do), visit the attractions independently (which defeats the purpose of travelling together), or skip out on those attractions altogether (the way we usually go).

However, the positives outweigh the negatives so much that we find ourselves leaning toward these outdoor getaways, which leads to our next point…

2 // We have the perfect excuse for country getaways

The UK is full of gorgeous country hotels and Giorgio has made us more motivated than ever to go and stay in them. There are so many boutique dog-friendly hotels in the UK that over a wide range of dog-friendly amenities as well as provide a stunning place to stay for the weekend. These hotels are often located on large pieces of land, creating the perfect walking grounds. 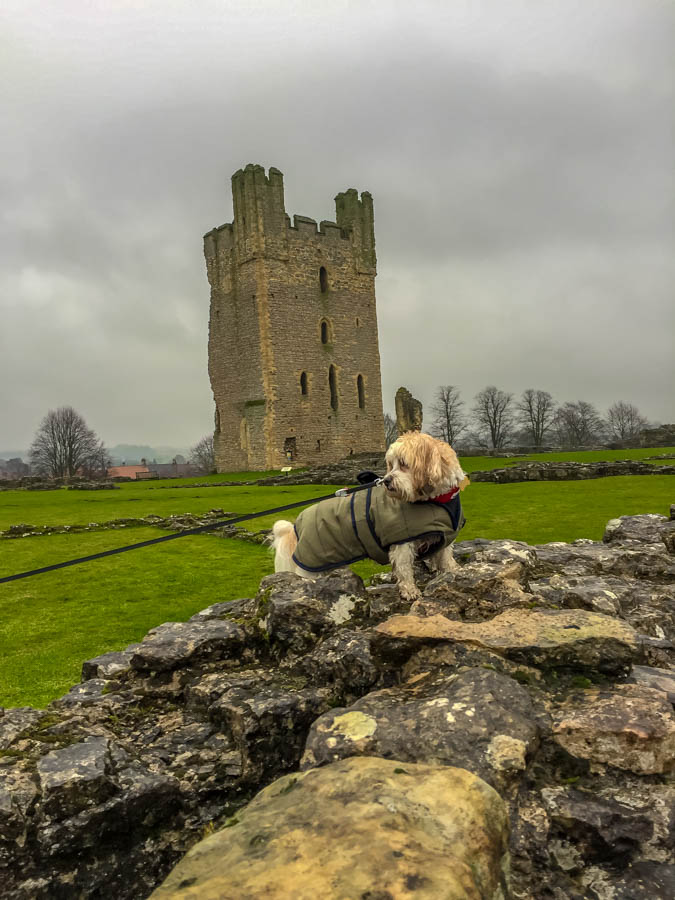 Now, whenever we have a couple of long weeks in a row and don’t get the opportunity to get Giorgio out much, instead of lazing around all weekend like we used to, we look for last minute dog-friendly getaways within a couple of hours of home. It ends up being a relaxing weekend in the country for us and an exhausting weekend of running around and exploring for Giorgio. All three of us return to London feeling refreshed and prepared for the week ahead – working for us, sleeping for little G!

3 // We are seeing more of the place we call home

Instead of spending time googling the cheapest destinations to go to in Europe when we feel like getting out of town, we spend time looking for the next dog-friendly hotel we want to stay in. We are trying to see as much of the UK as possible at the moment, and spend a lot of time looking at which corner of the country we can explore next. While we have high hopes for a future drive/ferry to Ireland and roadtrip around there with Giorgio (and to Scandinavia, too!), there is still so much right here that we haven’t seen. Giorgio’s presence in our lives, mixed with our desire to travel, is forcing us to get out locally and explore the beautiful country that we live in – incredible weekends away, no passport required!

A Well-Travelled Dog: A Summary of Giorgio’s Adventures

While we love our dog-friendly adventures as dog owners, we like to imagine the dog likes them even more. He has yet to actually confirm this with us, but his excitement when we get in the car and immediate comfort when we arrive at hotel rooms makes us think we’re pretty validated in thinking that. 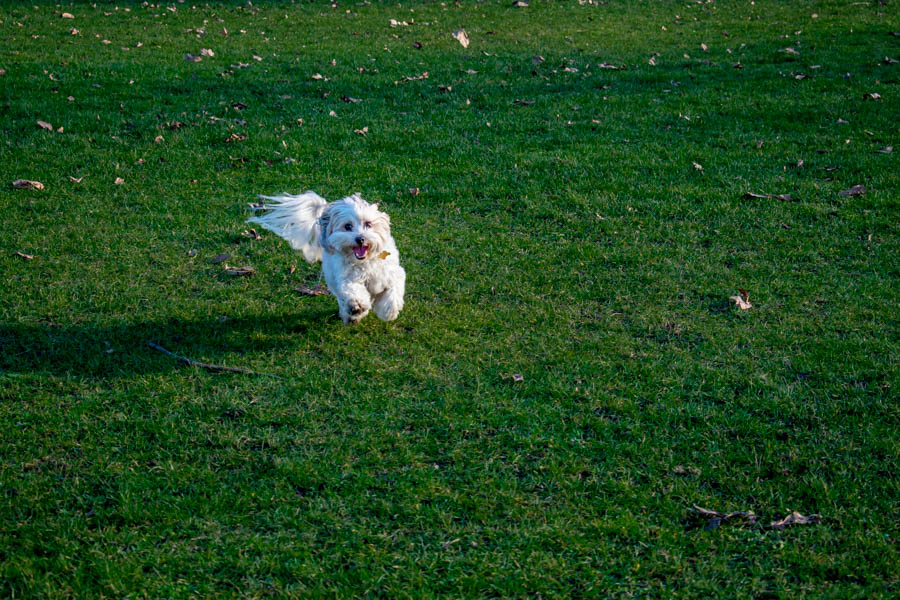 Here’s a quick look at Giorgio’s adventures over the last six months:

Between day trips, weekend trips, and our long week in the North East at Christmas, Giorgio has made his way around many UK destinations so far. He has yet to leave England, but we’re working on that! Our trips so far have included:

Giorgio loves the car, which makes our dog-friendly weekend trips super easy. We just jump in the car and get on the road without needing to worry about him being anxious.

So far, Giorgio has stayed in four different hotels. Each one is fully dog-friendly and has their own idea of what that means. They all offered a completely different experience while still making Giorgio feel right at home! 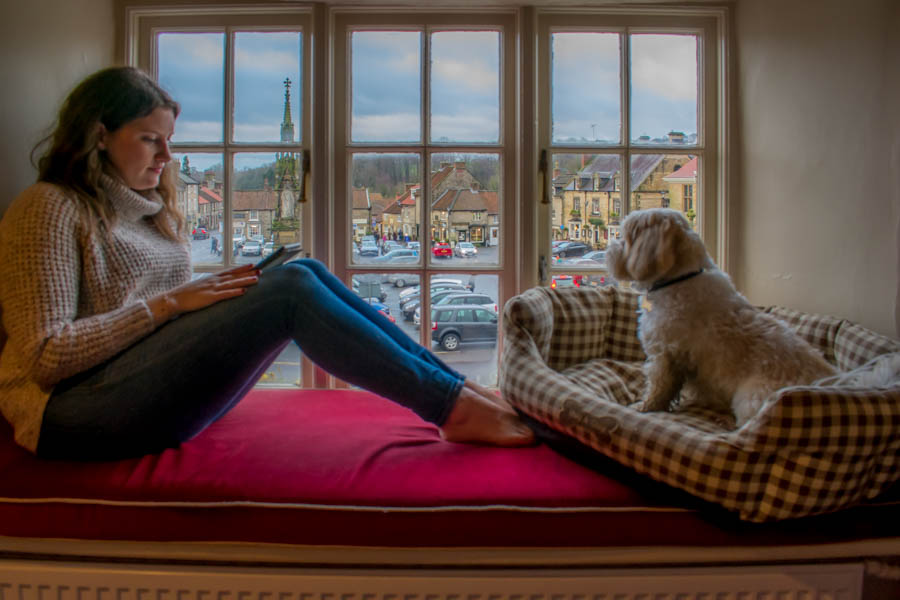 Click on each one to read a full review & see how Giorgio fared during his stay. 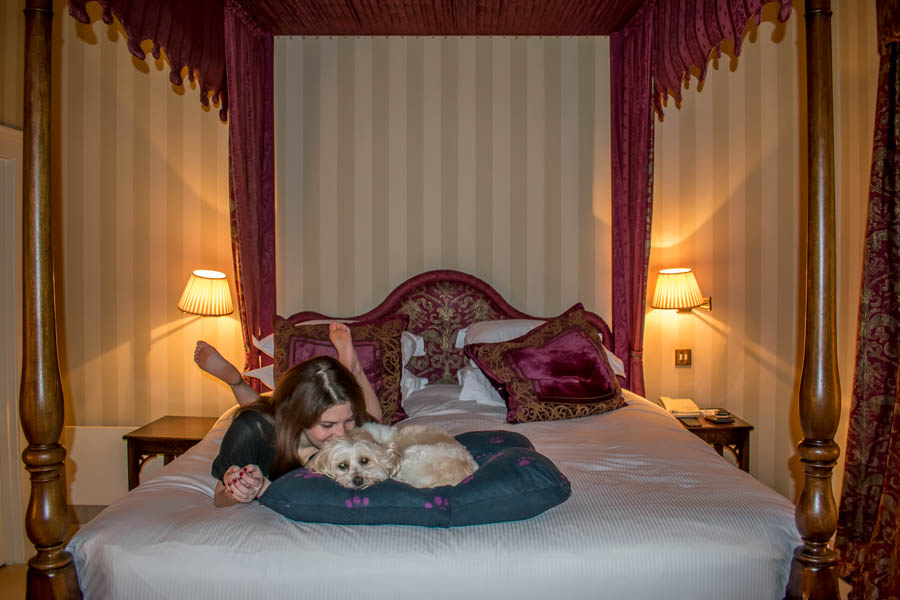 Giorgio has probably visited more notable landmarks than most people who live in the UK, and we are extremely proud of that. It’s so great that many of the National Trust and English Heritage sites are dog-friendly. It gives us the opportunity to explore the landmark and learn a bit of history while Giorgio can sniff to see how the scents differ across the UK. Our top three dog-friendly sites so far are Blenheim Palace, Carisbrooke Castle, and Byland Abbey. We’ve managed to get some pretty incredible photos of Giorgio at these sites (and others). Here are two of our favourites: 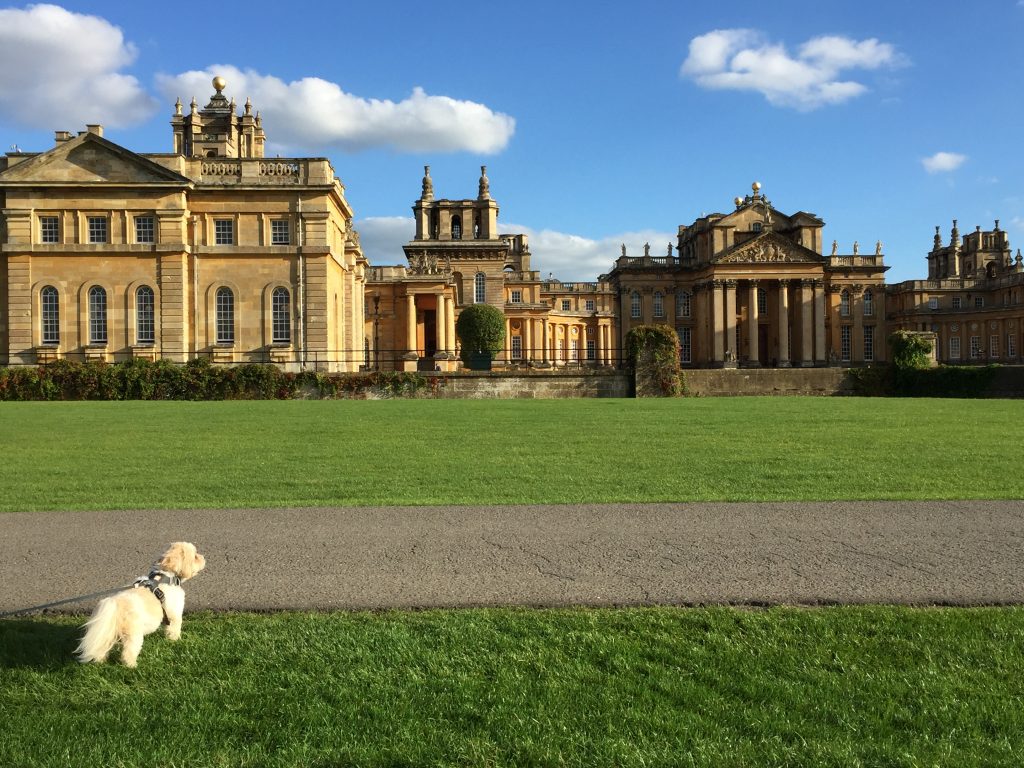 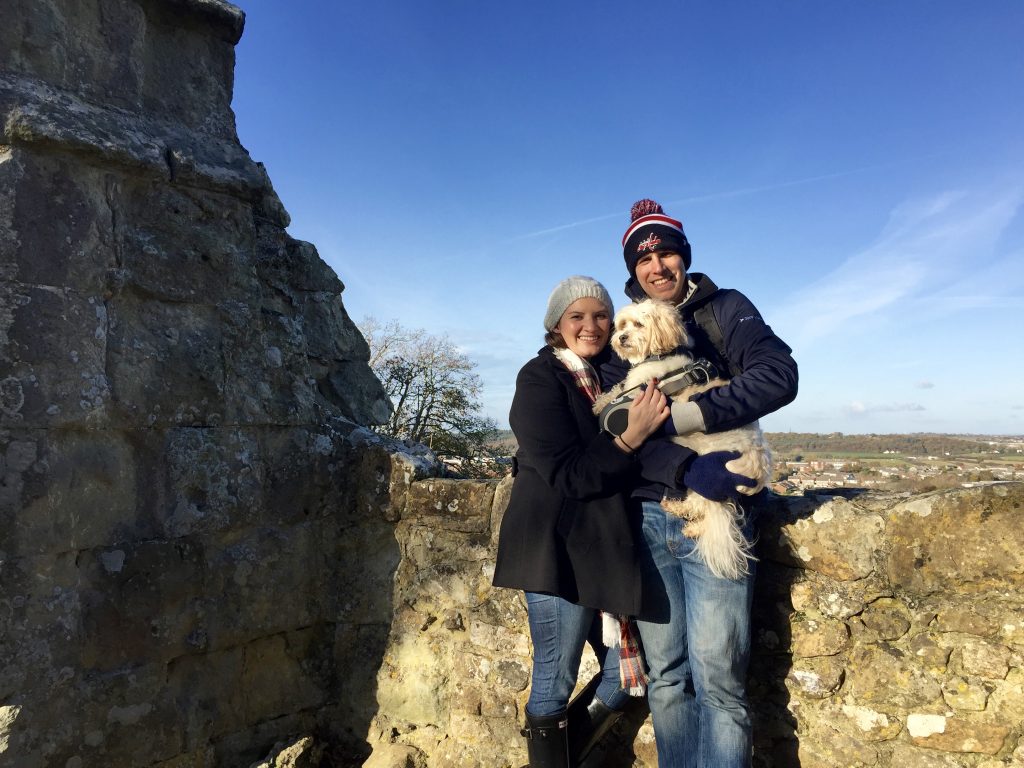 Believe it or not, Giorgio’s life in the UK consists of more than travel! Since moving from the US to the UK, Giorgio has improved his walking on a lead skills, become an incredibly lean and fit dog (he’s perfectly healthy, don’t worry), and turned into a bit of a spoiled brat. We’re 100% to blame for that last one though!

We probably go to the pub more than we should, but what Londoner doesn’t? The good news is that, when we go to the pub, we aren’t neglectful parents leaving our little one at home. He gets to come with us! We almost always go to dog-friendly pubs now and actually get a bit annoyed when we can’t. Our two locals are the King & Co. and the Coach & Horses in Clapham, and he’s a bit of a local celebrity at both. Giorgio seems to like both, but the King & Co. is definitely a bit calmer, which puts Giorgio at ease. The Coach & Horses is slightly closer, though, so thanks to the winter months, the staff there know all three of us a bit too well!

He has also visited local Clapham favourites like The Windmill and The Falcon, as well as a few other pubs around London. Our goal once Spring hits is to get out and explore more of dog-friendly London – pubs are at the front and centre of that so we’ll be sure to provide our recommendations! 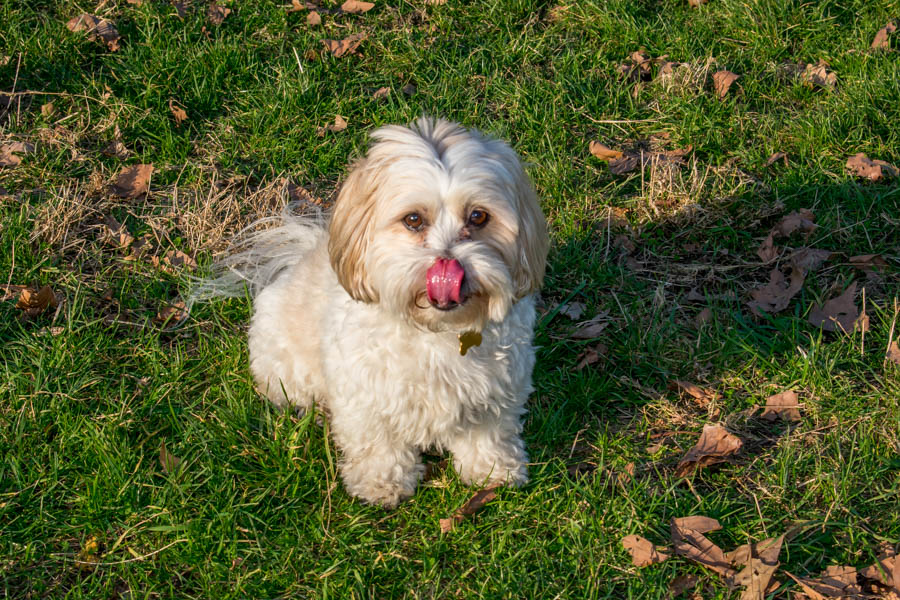 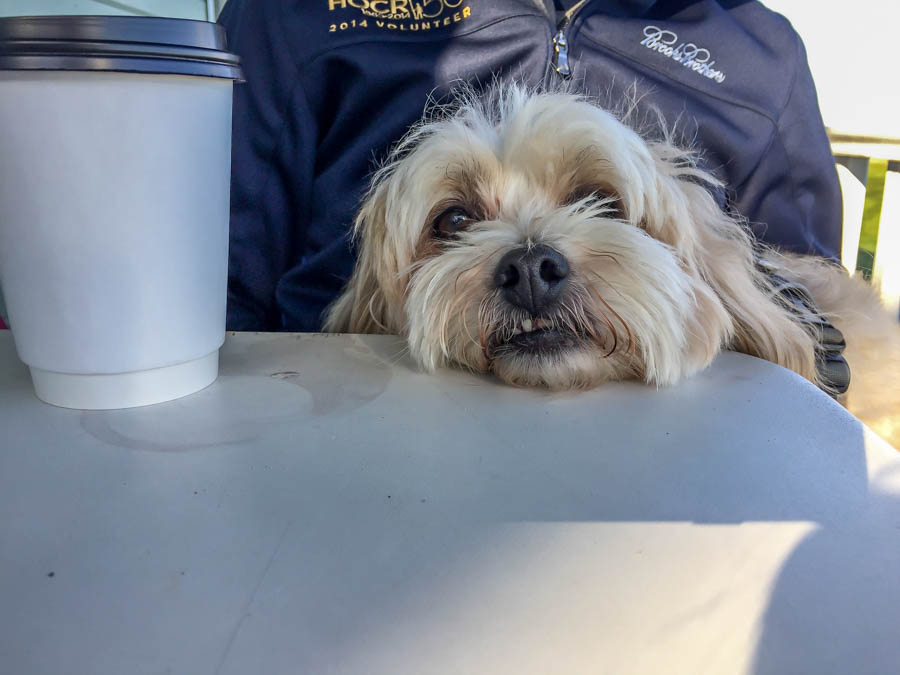 So there’s a glimpse at the life of a travelling dog. We think Giorgio’s living the dream, sleeping all day and travelling on the weekends. Where can we sign up?

No but really. He may be living the dream, but we couldn’t be luckier to have him around. He’s actually the easiest dog to care for so all he brings to our lives is pure joy and excitement. We cannot wait to see where we take him over the next six months, and then the years to come after that.

Happy dog-friendly travel to all! 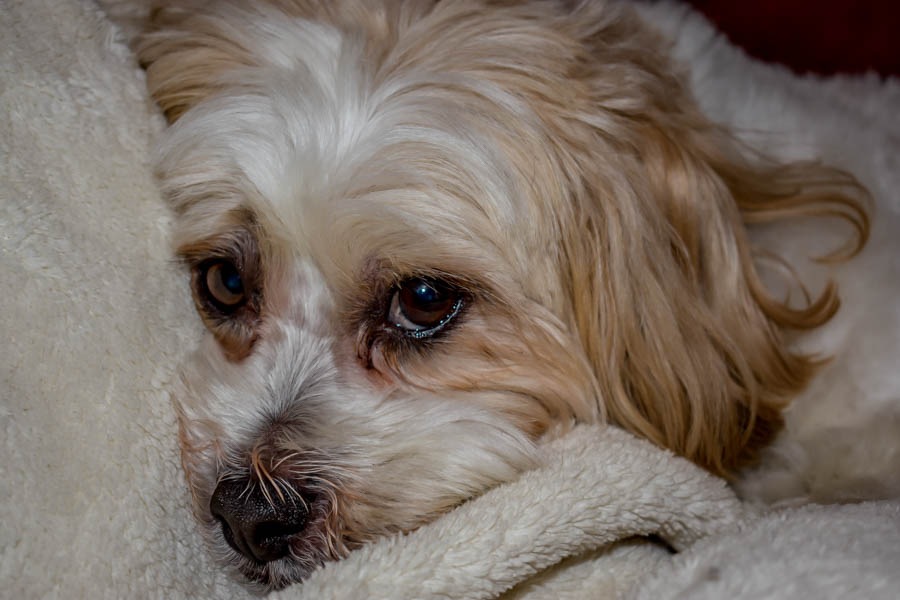 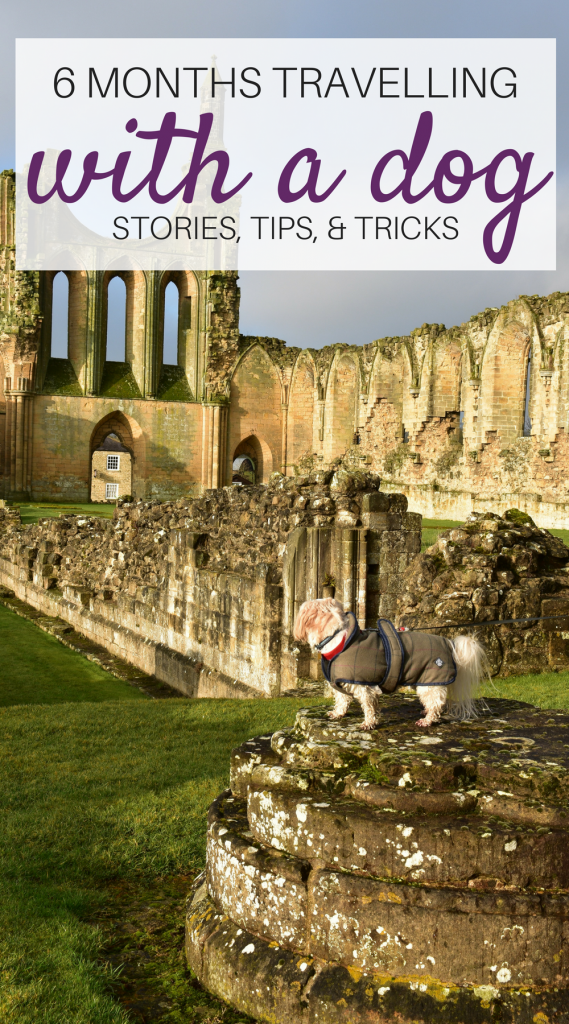 5 thoughts on “Giorgio the Travelling Dog: 6 Months in England”