Visitors to the UK often remark on how small it is. Especially for Americans, it’s crazy to think that you can drive across your entire country in less than a day. But imagine experiencing the all the best parts of the UK in a region that you can drive across in ONE HOUR. Do you prefer country getaways, or seaside relaxation? Bustling towns or sleepy villages? Crashing waves or trickling streams? There’s no need to pick when you can have it all.

That’s impossible, you might say! A region that has ancient castles and modern palaces; sprawling fields and sandy beaches; breweries and vineyards; cosy pubs and gourmet restaurants, all within an hour drive? It exists, and it is called the Isle of Wight.

So…is it really as great as it sounds?

Last weekend, we hopped in the car, drove aboard our WightLink ferry, and crossed the Solent to Fishbourne, Isle of Wight to check out this magical sounding island for ourselves. It was the off-season, so the beaches were empty (yay!), some attractions were closed (boo!), and there weren’t any crowds anywhere (yay!). With Giorgio in tow, we spent three days driving around the island, hitting every region, trying (almost) every local alcohol, and getting sandy running on the beach. Well, it was mainly Giorgio getting sandy…

Here is a recap of our favorite things that the Isle of Wight has to offer: 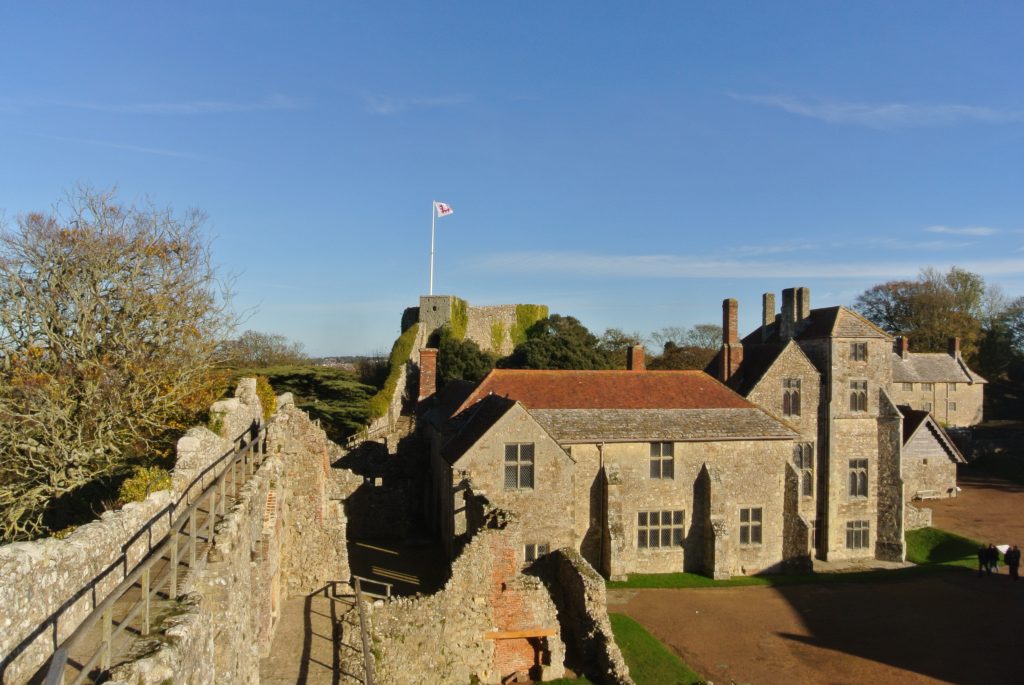 There are five English Heritage sites on Isle of Wight, and the two that we visited were probably our favorite stops on the trip! I love exploring castles and palaces in general, but doing it when there is nobody else around is a completely different and wonderful experience. I imagine all of the sites are absolutely flooded with tourists in the summer. However, as we wandered around the grounds of Osborne House and the perimeter of Carisbrooke Castle, we maybe ran into two or three groups of people the entire time. Other than that, it was all ours. This is a major perk of off-season travel. 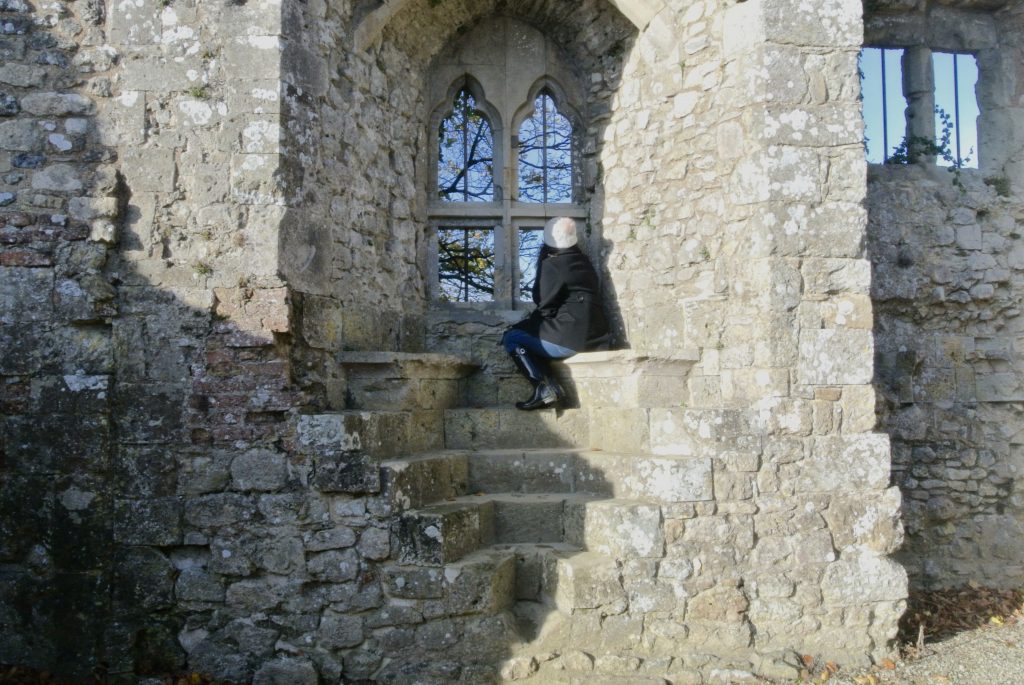 All of Carisbrooke Castle is dog friendly, with the exception of the museum and cafe. Little Giorgio was jumping up ancient staircases and prancing along the top of the castle walls like a champion! Because there were so few people there, we were able to take our time walking the perimeter, pause and take photos, and admire the views while reading about the history of the castle.

King Charles I was imprisoned at Carisbrooke Castle during the Civil War, and Tthe most recent resident was Princess Beatrice, Queen Victoria’s daughter, up until the 1940s. Today, when you visit the castle, you can walk along the top of the castle (almost) all the way around, climb up to the castle keep, and see donkeys work the well as they did in the old days. It’s an attraction that literally anybody could enjoy! 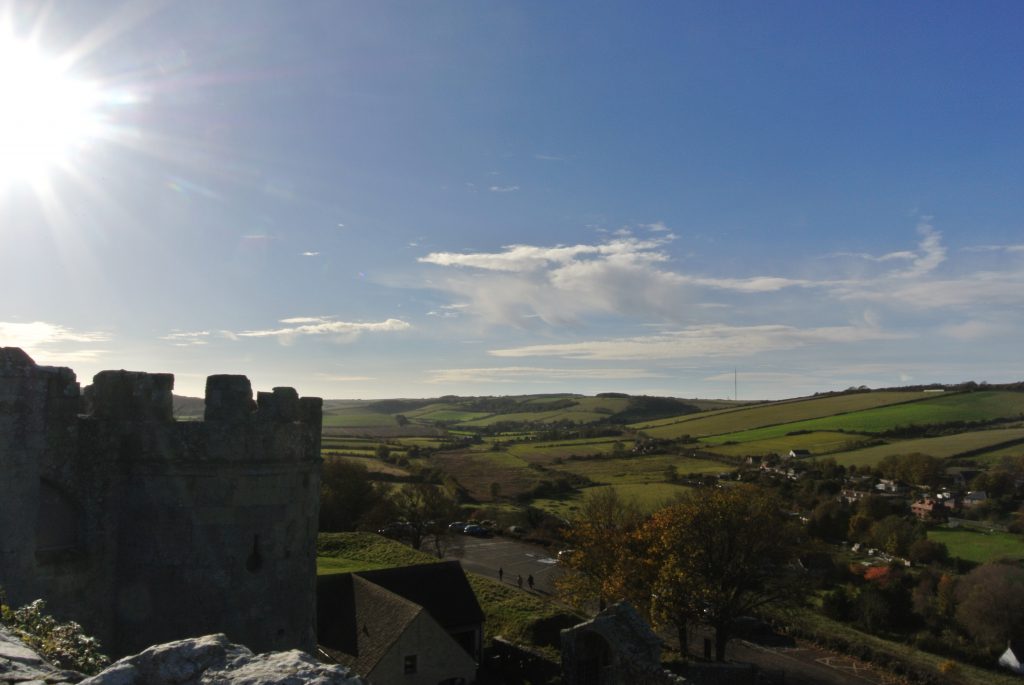 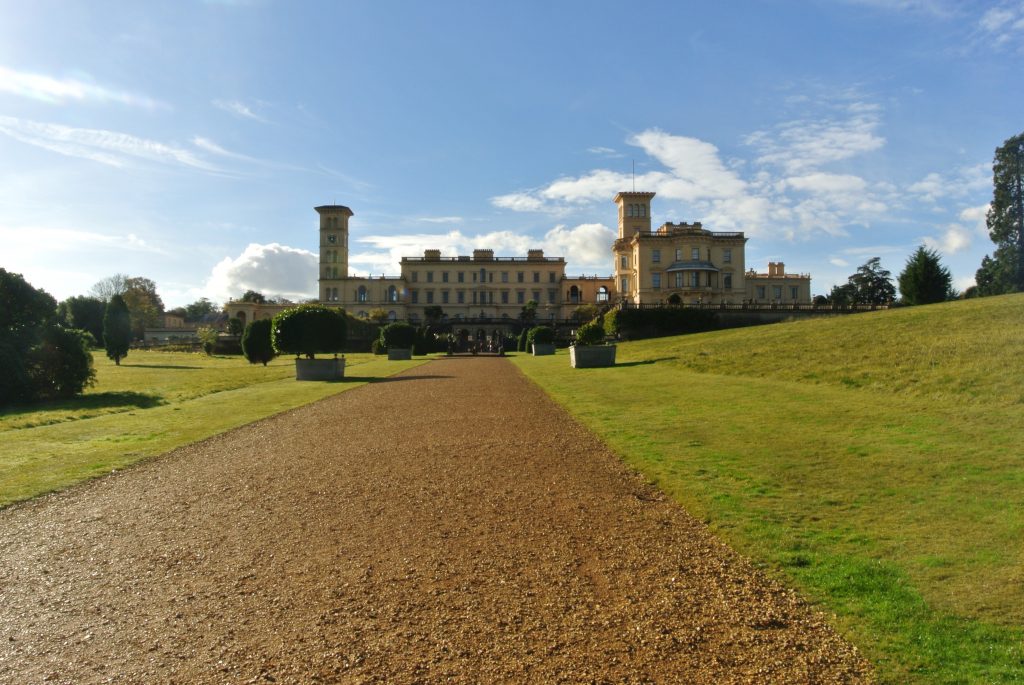 Osborne House was built in the mid-1800s as a summer house for Queen Victoria and Prince Albert – yes, essentially a beach house that puts any beach house you’ve ever seen to shame. The inside of the royal residence is open for tours, but because we had Giorgio with us, we stuck to exploring the grounds. We took a nice long walk along the far side of the grounds to the beach, where we grabbed a coffee and admired the views. As we walked back in, we went straight up the main path to the house. 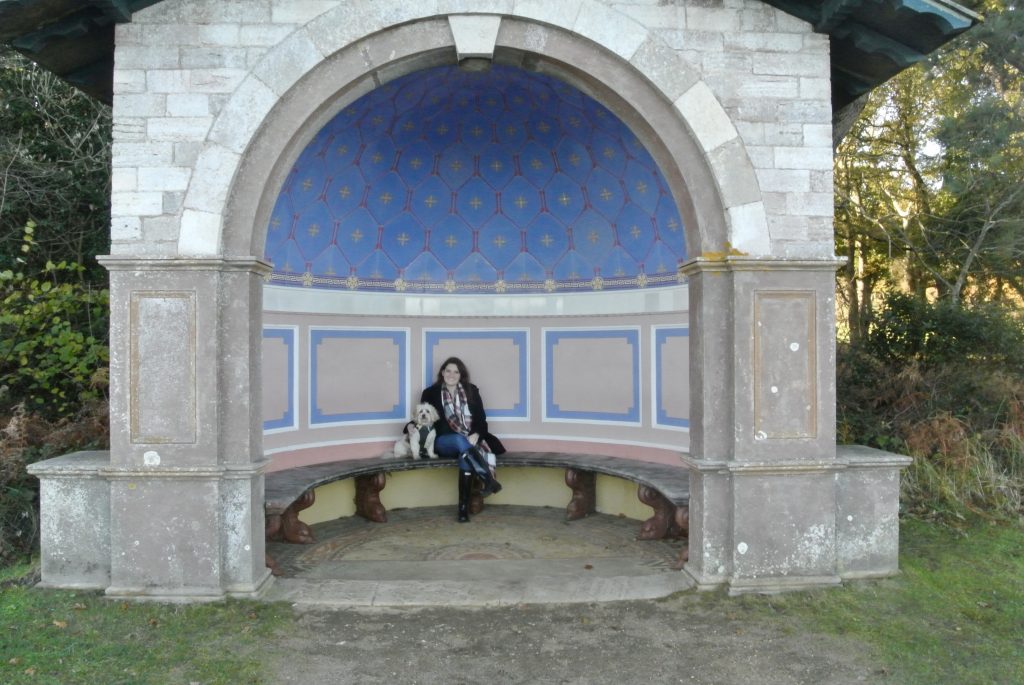 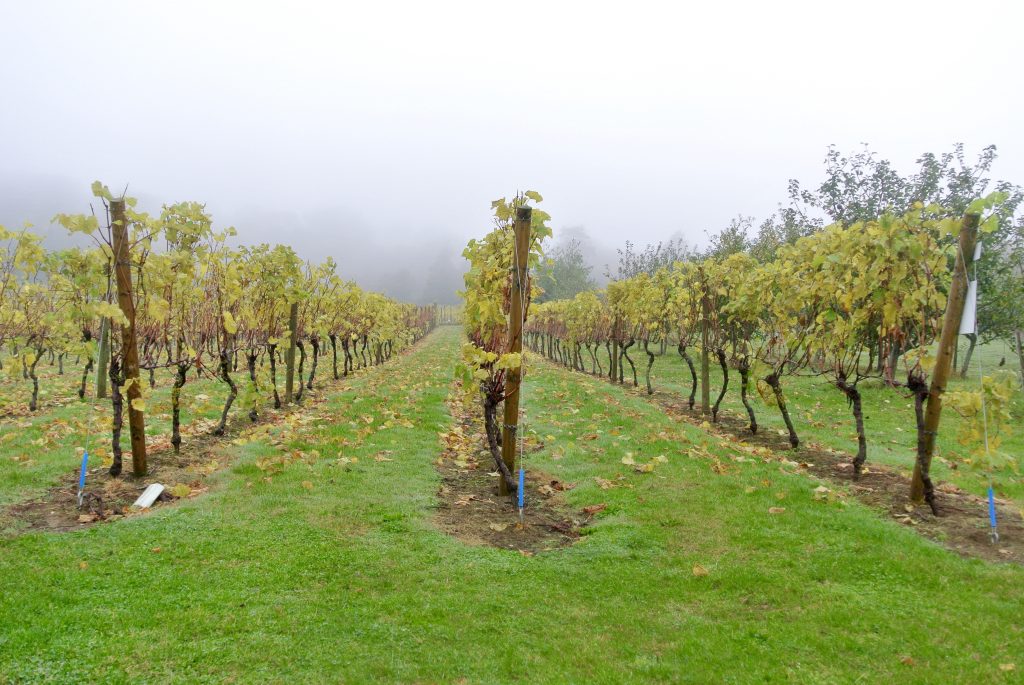 As you know, one of our favorite things to do while traveling is try local drinks (aka alcohol). This usually involves wine tasting, but we also like to try local beers whenever we get the chance. On Isle of Wight, we had the opportunity to do both! There are two wineries on the island (Adgestone Vineyard and Rosemary Vineyard) and three breweries (Yates, Goddards, and Island Brewery). There is also a distillery and some cider makers. 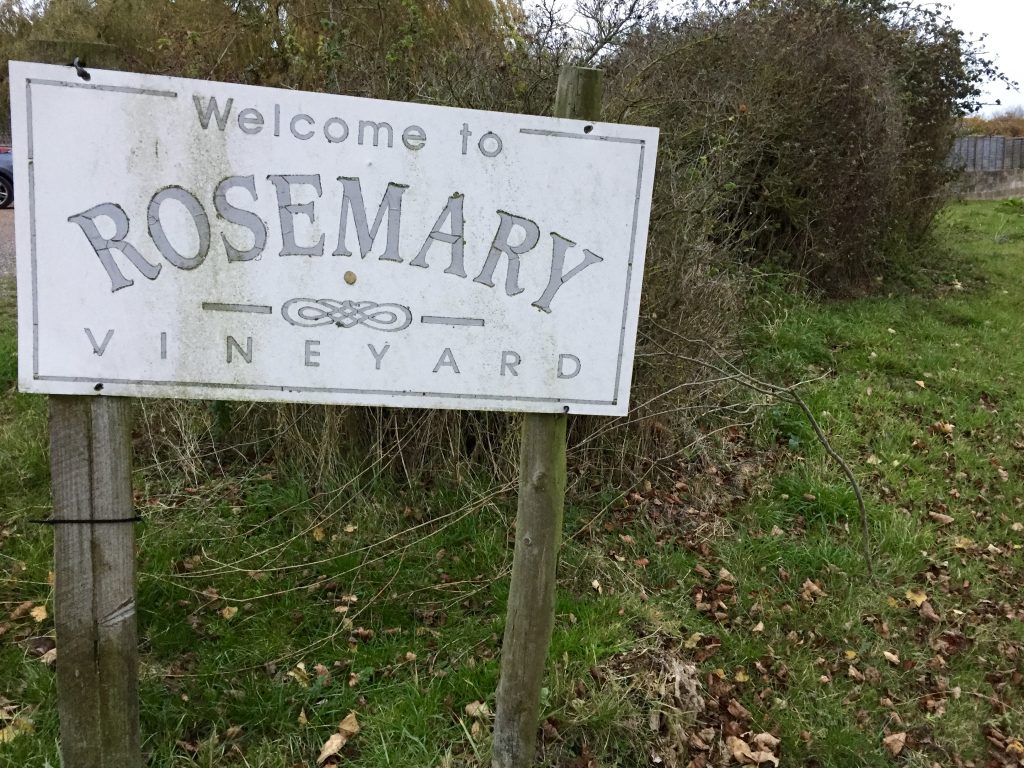 We were able to visit both wineries while on Isle of Wight, as well as try beer from two of the breweries – the breweries are not open to the public, so you have to find them in pubs! Fortunately, our adorable hotel had two of them on tap. The wineries both offered tastings, and we were also able to do a little self-guided tour at Rosemary. This was actually our first time trying English wine, and we were pleasantly surprised – we came back with like five bottles, plus some beer and cider! Keep an eye out for a full review of the alcohol experiences. 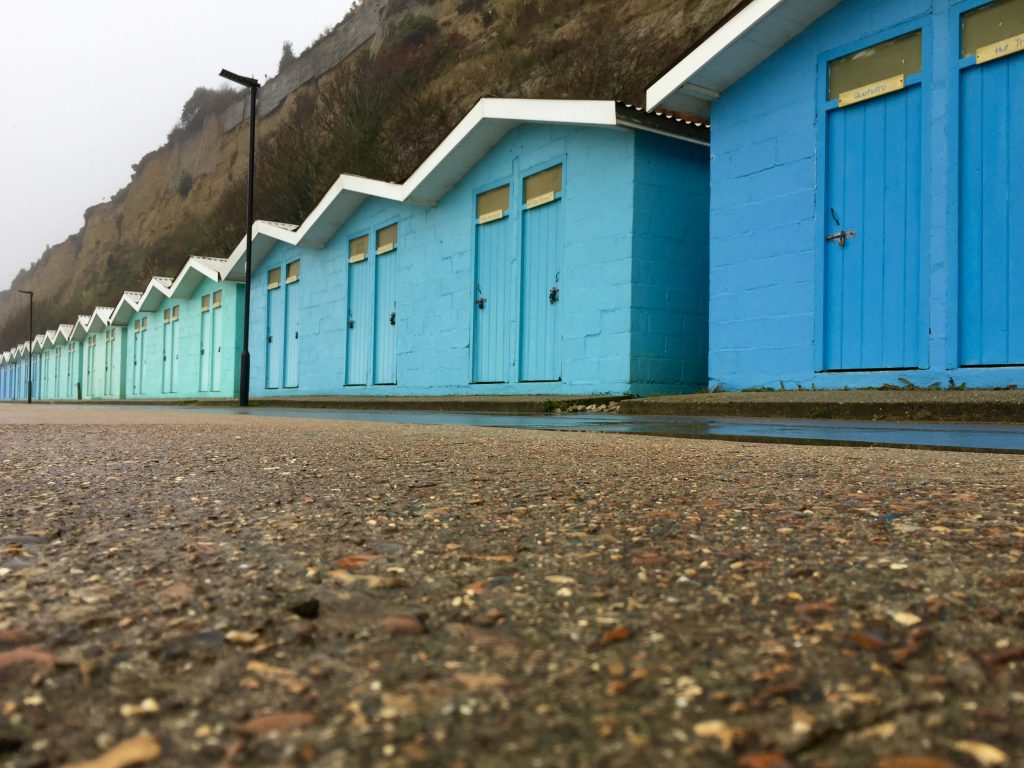 You can’t really visit an island without spending a good amount of time on the beach. We tried to get onto a beach at least once each day so Giorgio could run around, but I think we actually had as much fun as him! Like everything else, the beaches were empty – we ran into a few dogs and their owners every once in awhile, but Giorgio pretty much had full reign. The other great thing about visiting in the off-season is that many beaches are closed for dogs from March-September. Since we visited outside of that time, Giorgio could go on pretty much every beach, or at least all of the ones we stumbled upon!

We only found one sandy beach during our visit, which was near Sandown Pier. Giorgio was quite upset when we told him it was time to leave and he could no longer decorate the sand with his pawprints. We also found rockier beaches in Gurnard and Ventnor – Ventnor had smaller, pebble like sand, so it was much easier on the dog, but he struggled in Gurnard a bit. 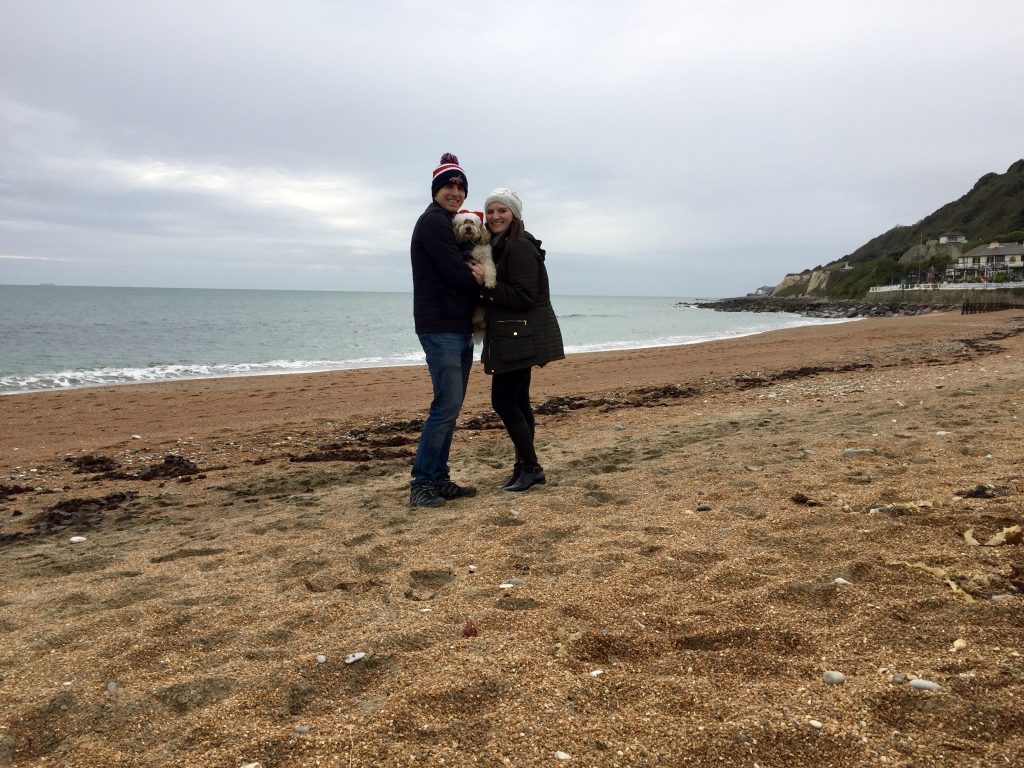 My favorite part was definitely the beach huts. Each beach we visited had a different color scheme and shape going on, and they were so picturesque! A couple of our Instagram followers asked if we were able to stay in one and I immediately though, I wish! I’m almost tempted to buy one and attempt to turn it into a little studio AirBnb, though I doubt that’s allowed.

Another thing that goes hand in hand with the beach is gorgeous sunsets. Our friends at Visit Isle of Wight recommended watching from the Woodvale Pub in Gurnard (near West Cowes), so we made sure to make time for that. The beach would have been even more perfect for watching it, but we were too cold to be on the water as the sun was going down! Instead, we stayed inside at the pub by the fire until right about the time when the sun was really setting, and then we took our drinks outside to the patio, where it was still quite cold.

I did sneak down to the beach to get a couple of shots, though, and really wanted to stay down there to witness the whole thing. We were there on a cloudy evening and it was still beautiful, so it must be absolutely breathtaking on a warm, clear summer day! 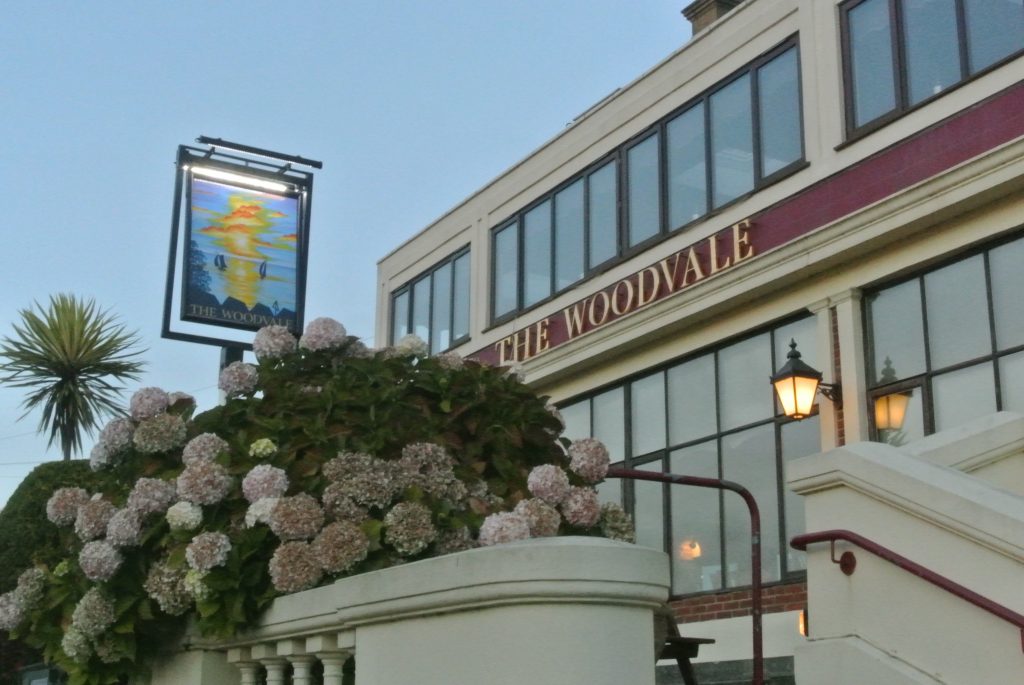 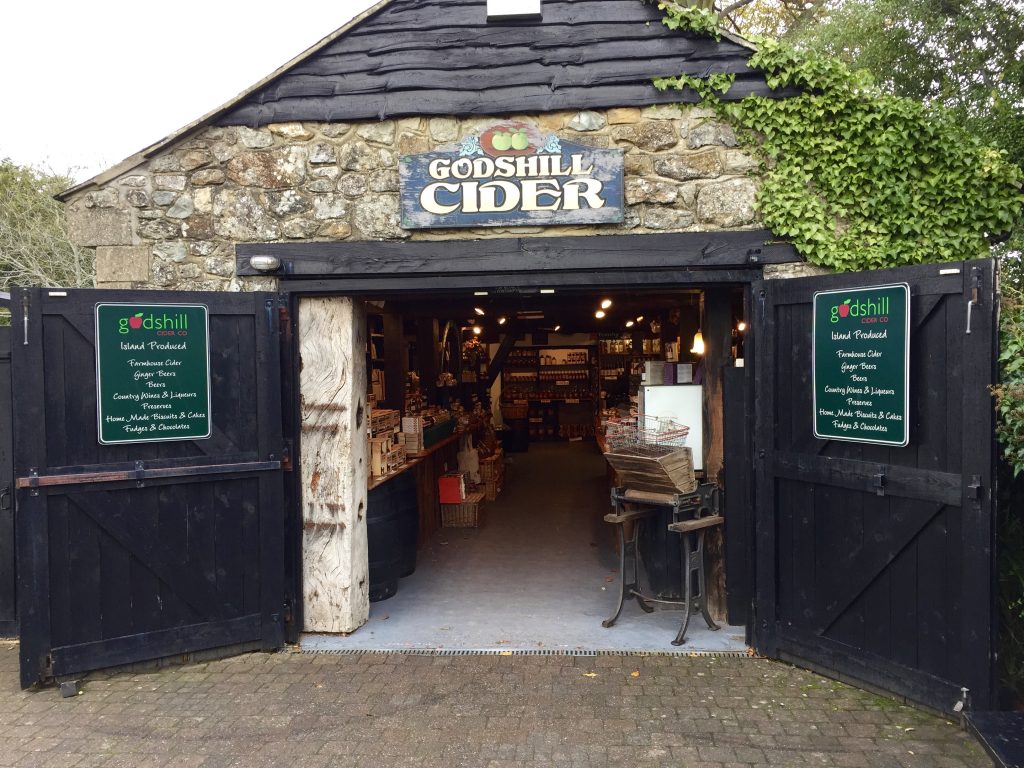 In addition to the local beer, wine, and cider, the Isle of Wight is flooded with local goods to take home to the mainland. For example, an entire farm, shop, and restaurant dedicated to garlic also sells goods from around the island. The Cider Barn in Godshill sells all of the other beers and wines and biscuits from the island. Even the vineyards sold other products, though not each others wines! 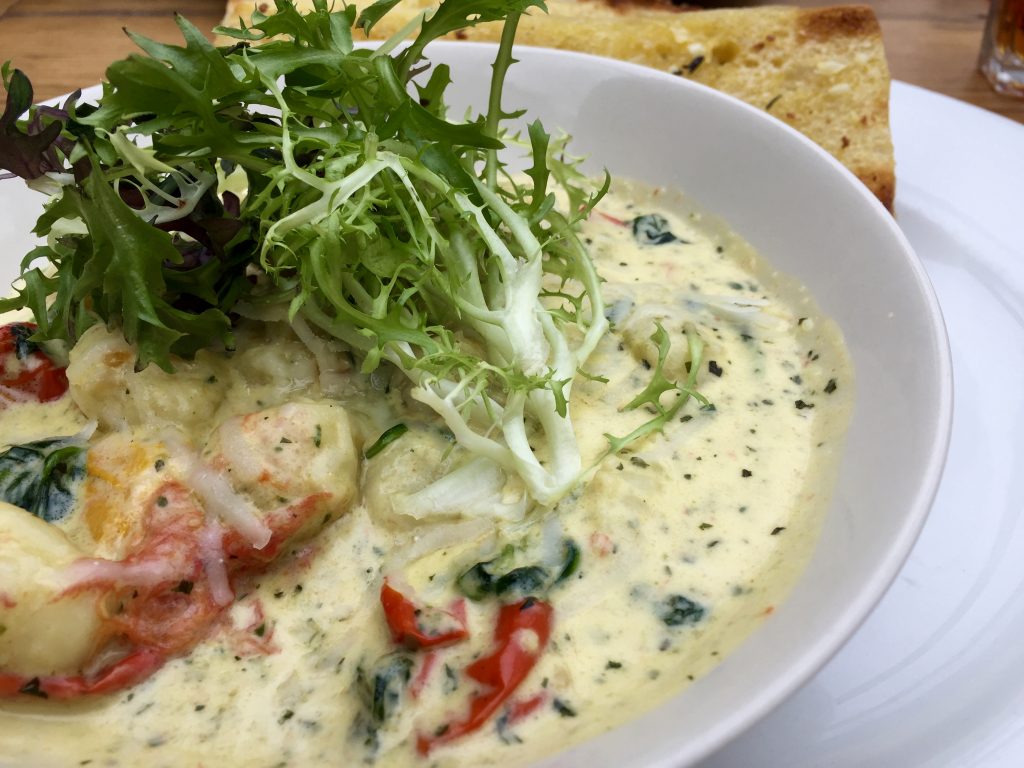 It felt like each local shop supported all the others, and it was so great to be able to walk into one and get everything. As touristy as it can be sometimes, we love returning home with goods local to where we recently visited, and this was no exception.

I think our tally by the end of the trip included: 5 bottles of wine, 2 beers, 4 ciders, 1 bottle of gin (we sound like alcoholics!), clotted cream fudge, chocolate chip cookies, and garlic beef jerky. And that was after we put some items back! 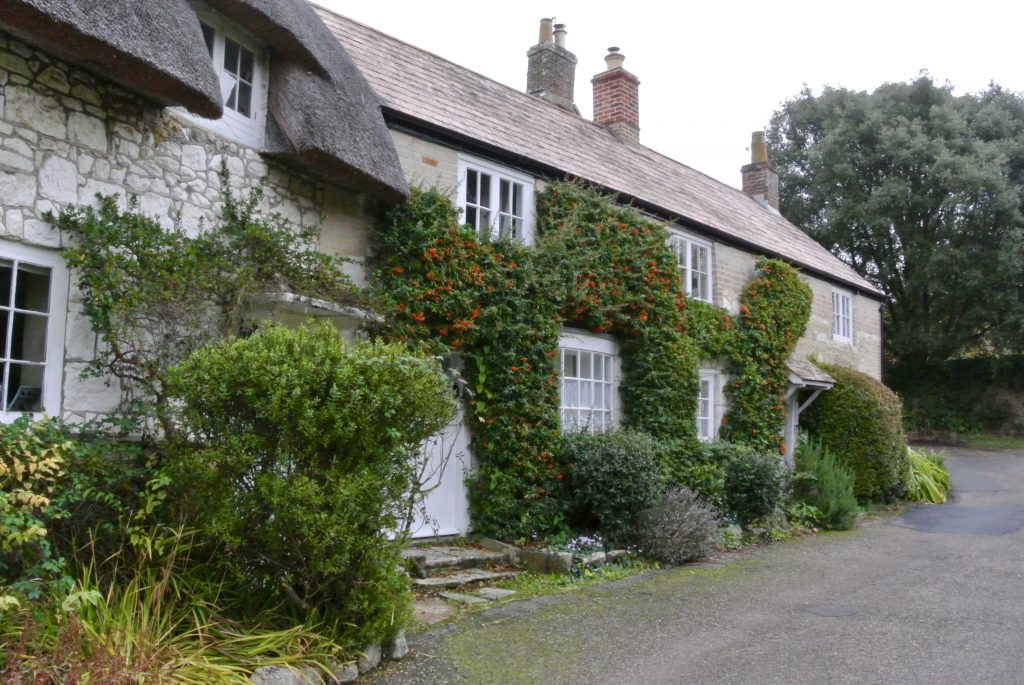 Every corner we turned while driving around the island offered an adorable town waiting for us on the other side. From the teeny tiny farm village of Calbourne, home to Winkle Street (pictured above) to the views of larger, more modern villages from Carisbrooke Castle, I honestly fell in love with each neighborhood on Isle of Wight. I found myself filming us driving over and over again because the views out the windscreen of whatever street we were driving down were perfect.

I really wanted to create a village guide similar to the one we created for the Cotswolds, but we unfortunately could not spend enough time in each of the villages. Instead, we have a different neighborhood guide planned, so keep an eye out! 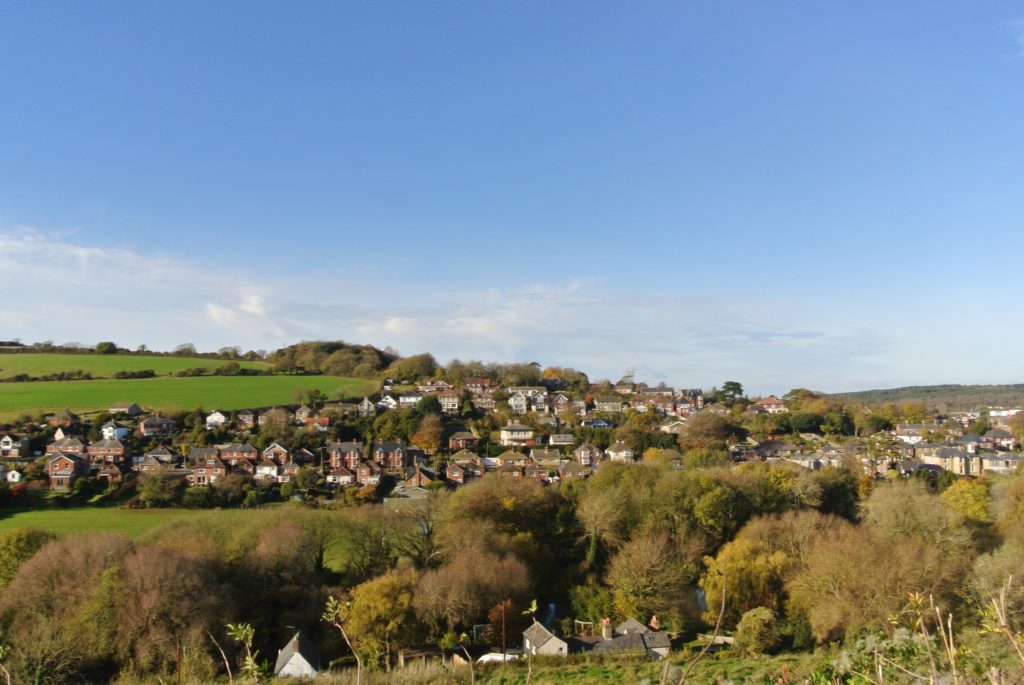 So – you’re ready to book your off-season Isle of Wight trip! 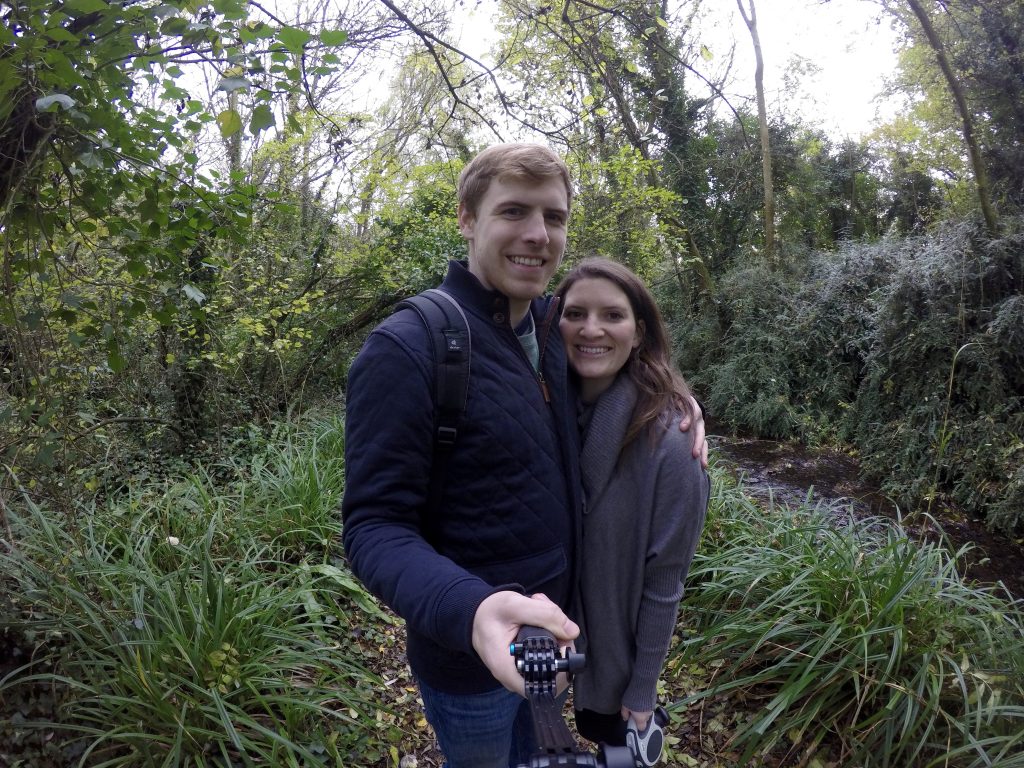 We don’t blame you, even we are ready to return just a week and a half later! Off-season Isle of Wight is beyond beautiful, so relaxing, and so much fun. I grew up visiting the Jersey Shore and, although I loved the peace and quietness of the off-season, I always ended up a bit bored. On the Isle of Wight, I think it just made me love it even more. Everyone was so friendly and welcoming, enough attractions were open to keep us occupied, and the fact that we could just drive and park up wherever, without dealing with high season traffic, made it the best trip we could have imagined.

As you plan your trip, definitely check out the resources offered by Visit Isle of Wight. There is so much information on their website, including all of the dog-friendly places and accommodation options. Also be sure to pick up a copy of WightLife Magazine on your crossing over if you sail with WightLink – we actually planned our route for our third day on the island using their guide to the various regions.

Read about our accommodation on the Isle of Wight here. Subscribe to our newsletter so you never miss a post!

We received a complementary crossing on WightLink Ferries and complementary entry to the English Heritage sites in exchange for social media & blog coverage. Thank you to Visit Isle of Wight for arranging that for us, and for helping us plan our weekend! Of course, all opinions and words above are 100% our own. We really, really think that Isle of Wight is the perfect weekend getaway!

Around the UK in 80 Weekends

This trip was part of our mission to go Around the UK in 80 Weekends. Check out where else we have been here.

Have you visited Isle of Wight in the high season?

We’d love to hear your experiences compared to ours. Let us know in the comments below! 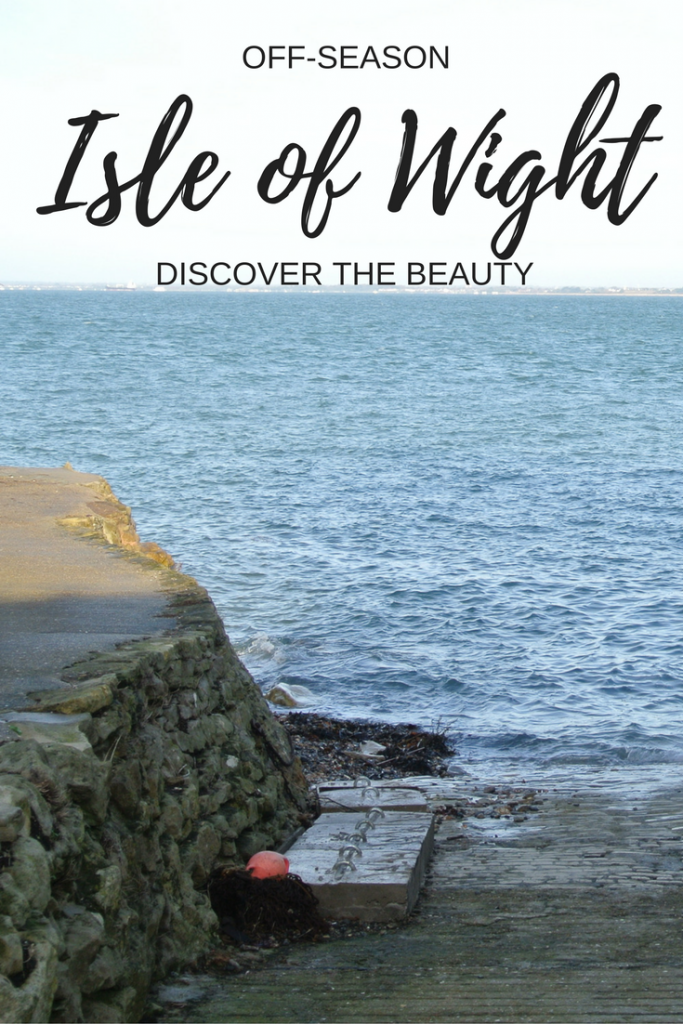 28 thoughts on “Isle of Wight: An Off-Season Island Adventure”

Follow us on InstagramInstagram requires authorization to view a user profile. Use autorized account in widget settings
Networks